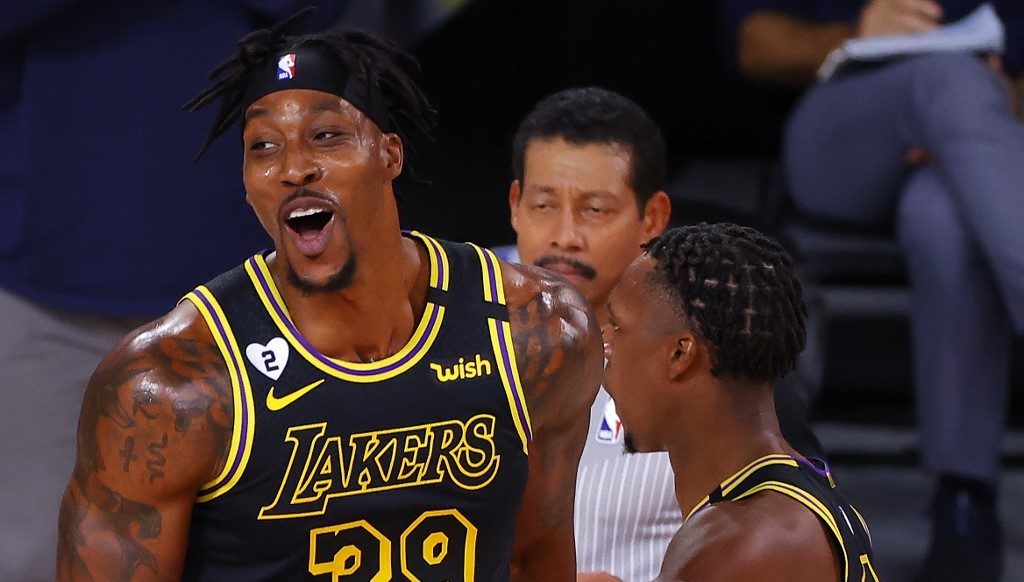 LAKE BUENA VISTA, FLORIDA - SEPTEMBER 20: Dwight Howard #39 of the Los Angeles Lakers reacts during the second quarter against the Denver Nuggets in Game Two of the Western Conference Finals during the 2020 NBA Playoffs at AdventHealth Arena at the ESPN Wide World Of Sports Complex on September 20, 2020 in Lake Buena Vista, Florida. NOTE TO USER: User expressly acknowledges and agrees that, by downloading and or using this photograph, User is consenting to the terms and conditions of the Getty Images License Agreement. Kevin C. Cox/Getty Images/AFP

Facebook Twitter Copy URL
Copied
Dwight Howard returns to the NBA Finals for the first time in more than a decade with the Lakers, the very same team he bolted out of 7 years ago

As promised, Dwight Howard did not let his second chance with the Los Angeles Lakers go to waste.

Howard played a crucial role for the Lakers as they punched their NBA Finals ticket with a 117-107 win over the Denver Nuggets in Game 5 of their Western Conference title series.

Seeing action for 35 minutes, his most in this playoffs, Howard delivered 9 points, 9 rebounds, and 2 blocks in the series-clinching win, doing a stellar defensive job on Nuggets star Nikola Jokic.

“It means everything, just having this opportunity again,” said Howard, who will suit up in the NBA Finals for the first time since 2009 back when he still starred for the Orlando Magic.

“I promised myself if I ever got a chance to get back, I was going to give everything I got to help our team win.”

The 34-year-old big man did not exactly end his first stint with the Lakers on the best of terms.

Coming off a brilliant run with the Magic that saw him earn 5 straight All-NBA First Team selections and 3 consecutive Defensive Player of the Year honors, Howard joined the Lakers for the 2012-2013 season.

But after a disappointing first-round playoff exit and not getting along with the late NBA great Kobe Bryant, Howard bolted out of the Lakers after just one season with the franchise.

Since then, Howard played for 4 different teams – 3 seasons with the Houston Rockets and 1 each with the Atlanta Hawks, Charlotte Hornets, and Washington Wizards.

Now just a shell of his former self partly due to injuries, Howard signed a non-guaranteed contract with the Lakers, vowing not to be the locker room disruptor he had been known for in recent years.

“Everything that happened over the past couple of years, the ups and the downs, surgeries, all of the things that happened, this moment is very special,” Howard said.

The Lakers’ gamble on Howard obviously paid dividends as they won both games with him on the starting lineup to close out the Nuggets.

“Stay patient, stay humble, stay hungry, and never give up on yourself,” Howard said.

“Other people might give up on you, whether it be friends, family, whoever they may be, but never give up on yourself.” – Rappler.com