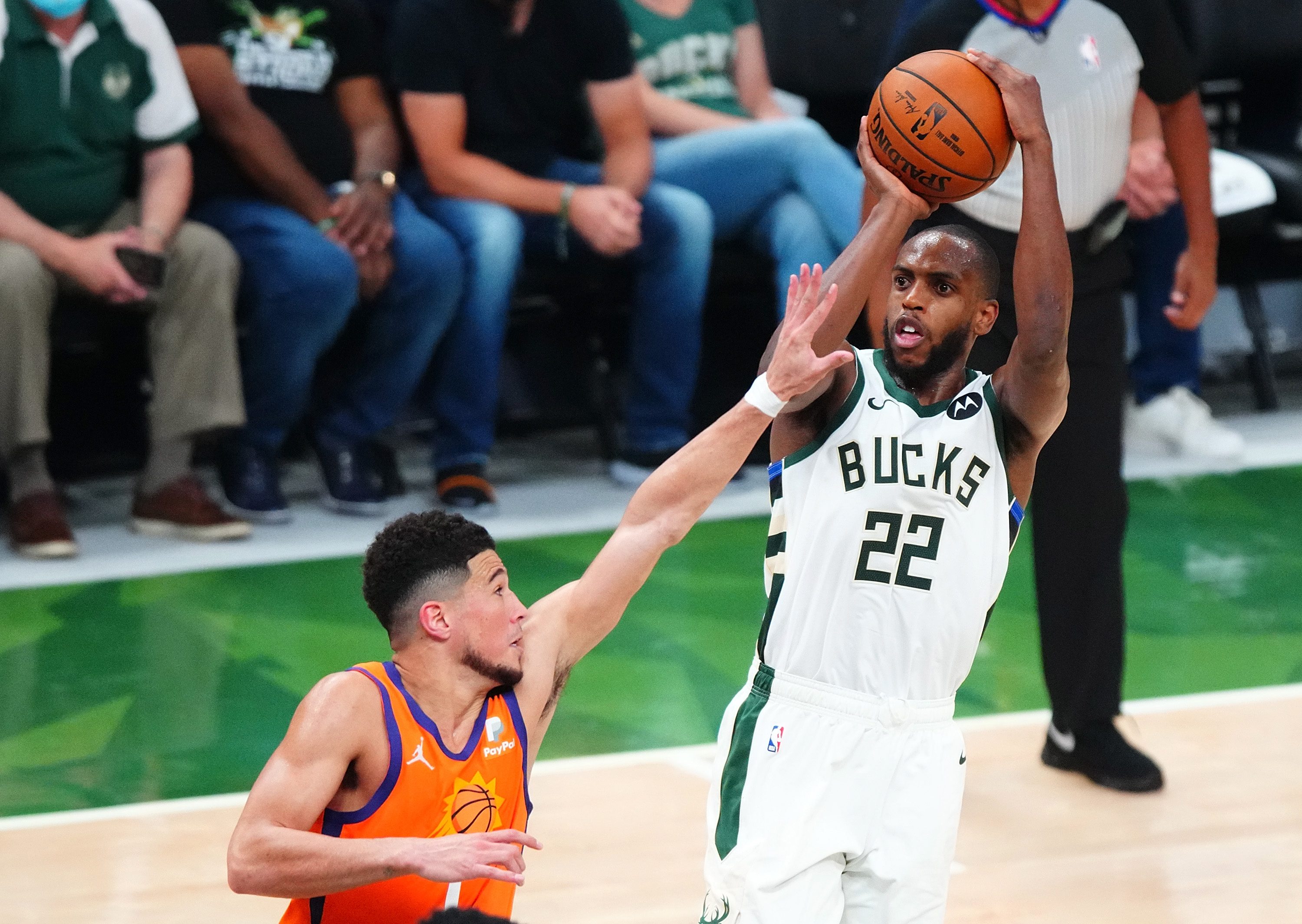 Khris Middleton earned his nickname in Game 4 of the NBA Finals as “Khash Money” came up clutch in the biggest game of his life.

“Late in the fourth quarter, we just ran sets that enabled me to get to my spots,” Middleton said. “After that I’ve just got to make reads. Thankfully, I hit some shots.”

Middleton scored 10 consecutive points and the Bucks rallied from a nine-point deficit to claim Game 4, 109-103, and tie the Phoenix Suns at 2-2 in the best-of-seven series.

Middleton made the money plays in the final two minutes with a freakish nod to Antetokounmpo, whose block of Deandre Ayton kept the Bucks’ lead at four points with 1:15 to play.

For most of the night, only fouls stopped Booker. The Suns’ top scorer scored 42 points despite being dogged most of the second half by foul trouble. Booker’s effort was his ninth game in these playoffs over 30 points. He had 10 points on 3-of-14 shooting in Game 3.

“It’s a mindset more than anything,” Booker said.

It was Booker who lobbed the ball to Ayton on Antetokounmpo’s amazing defensive play. The pass carried well wide of the rim and Ayton didn’t collect it cleanly.

“Just a hustle play,” Antetokounmpo said. “Going down the stretch – do whatever it takes to win the game. I saw the play coming. I was there in time, was able to get a good block and go down and get two points.”

Suns head coach Monty Williams believes Booker would have hit for 50 points if Phoenix eliminated “even five” of its 17 turnovers.

Antetokounmpo deferred more than usual and had 26 points, 14 rebounds, 8 assists, 3 steals, and 2 blocks.

“This is kind of a mental toughness win for us,” Budenholzer said.

It was all Middleton down the stretch for Milwaukee. He made four free throws after banging in a challenged lefty layup, which followed two contested jumpers in a clutch effort that left Booker to play runner-up.

Cam Johnson had 10 points off the bench for the Suns, who got only 38 total points from their other four starters.

“We’re two good teams. We’re 2-2,” Williams said as Phoenix heads home for Game 5 on Saturday. “That’s the deal. We put ourselves in this position. We’ve got home court advantage.”

Booker reached 40 points to tie the game at 97, answering Pat Connaughton’s corner three at the other end.

“I don’t count shots. I let the shots come to me and I take it,” Middleton said. “I don’t really count stats or shots until the end of the game.”

Paul had 10 points, 7 assists, and 5 turnovers. Ayton had 6 points and 17 rebounds for Phoenix.

Paul is averaging 4.3 turnovers per game in the Finals.

“You can’t just bank on the fact that you’ve got home court, you have to go out there and play the game,” Paul said. “You still have to execute. We tend to respond well. We know what we have to do. Be better.”

A trailing Antetokounmpo secured Jrue Holiday’s miss – a play crew chief James Capers said postgame should have been Booker’s sixth foul – and dropped in an easy two that made it 95-94 with 3:30 remaining.

Booker went to the bench when he was whistled for his fifth foul on an aggressive boxout of PJ Tucker with 10:47 left in the game and returned at the 5:55 mark.

As the Bucks tried three different defenders in front of him, Booker scored 18 in the third quarter and made all seven of his shot attempts.

Ragged execution and stagnant offense – one field goal in their first 10 second-half attempts – threatened to erase Milwaukee from the picture in the third.

But Phoenix turnovers kept the game within reach for the Bucks, even as the Suns surged on a 9-3 run to end the period.

Booker had a game-high 20 points in the first half on 8-of-15 shooting, and Middleton led Milwaukee with 16. – Rappler.com