Khris Middleton lifts Bucks to even NBA Finals at 2-all 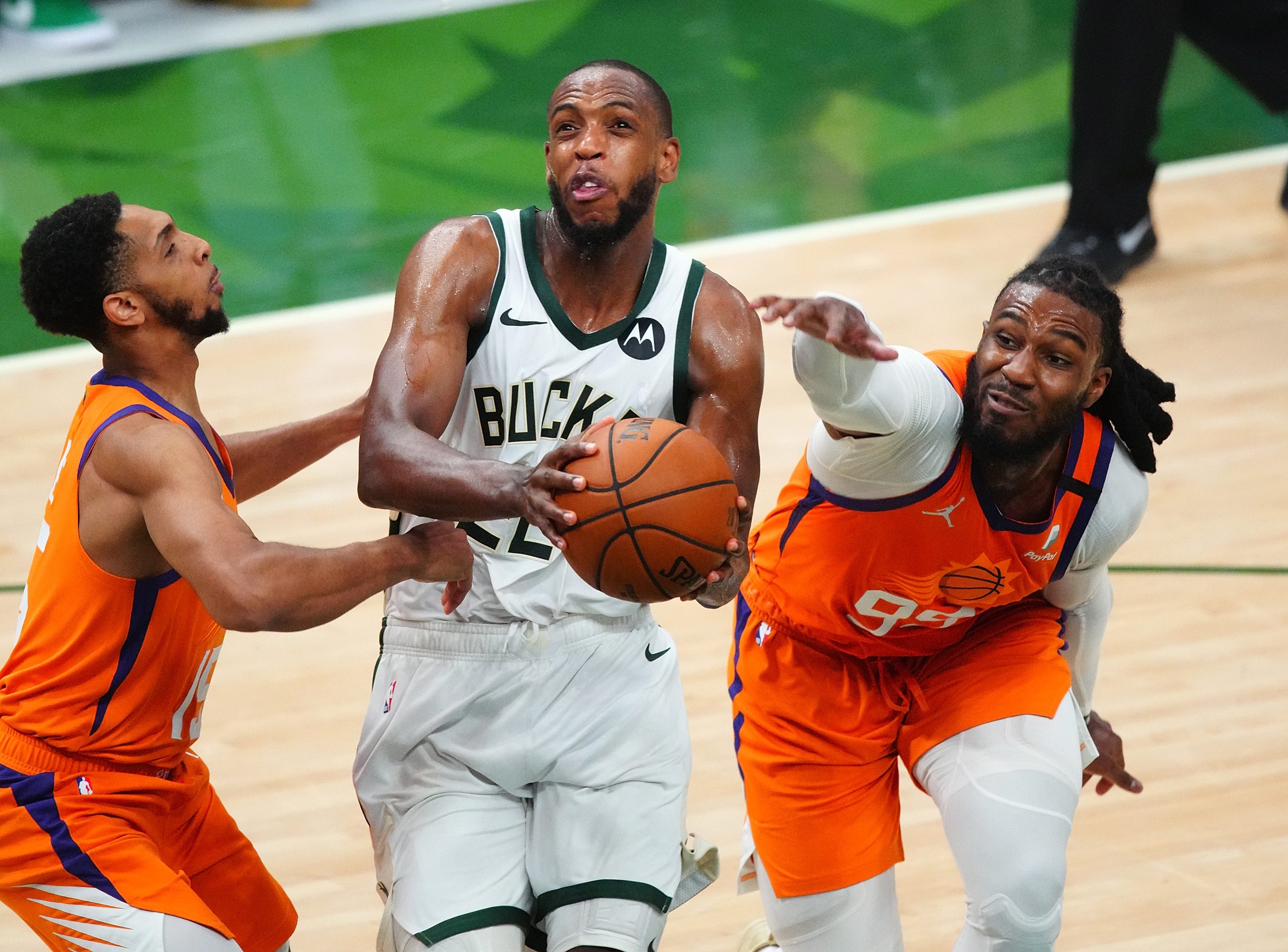 TIGHT DUEL. Bucks forward Khris Middleton (22) drives to the basket as Suns' Jae Crowder (right) and guard Cameron Payne defend in the second half of Game 4.

Khris Middleton scored 10 consecutive points in the fourth quarter to rally the Bucks to a 109-103 victory in Game 4 and Milwaukee evened the NBA Finals with the Phoenix Suns on Wednesday night, July 14 (Thursday, July 15, Manila time).

Middleton made four free throws after making a challenged lefty layup and two jumpers to carry the Bucks to a 2-2 tie in the best-of-seven series.

“Just staying strong, staying with it,” Middleton said. “Telling myself you’re always in the game no matter what the score until that clock runs out.”

Milwaukee overcame 42 points from Devin Booker and rallied from a nine-point deficit in the fourth quarter.

Tied at 99, Middleton put the Bucks up by two with a smooth jumper from the left elbow and Giannis Antetokounmpo blocked Deandre Ayton on a lob at the other end.

Booker reached 40 points to tie the game at 97, answering Pat Connaughton’s corner three at the other end.

Antetokounmpo did not match his plus-40 points efforts from the previous two games but still came up big for the Bucks with 26 points, 14 rebounds, and 8 assists, and put on a strong defensive effort that included a critical block late in the fourth quarter.

“It wasn’t a pretty game but [we were] able to keep that composure, keep calm and we had wide open shots that we missed that we usually make but going down the stretch we kept believing in ourselves, we kept executing, we kept setting screens, we kept getting stops, we kept running,” said the 26-year-old Greek forward and two-time league MVP.

“We wanted this bad and the team showed it.”

Chris Paul had 10 points, 7 assists, and 5 turnovers. Ayton had 6 points and 17 rebounds for Phoenix.

A trailing Antetokounmpo secured Jrue Holiday’s miss, on which Booker appeared to make enough contact to be called for his sixth personal foul, and dropped in an easy two that made it 95-94 with 3:30 remaining.

Booker went to the bench when he was whistled for his fifth foul on an aggressive boxout of PJ Tucker with 10:47 left in the game and returned at the 5:55 mark.

As the Bucks tried three different defenders in front of him, Booker scored 18 in the third quarter and made all seven of his shot attempts.

Ragged execution and stagnant offense – one field goal in its first 10 second-half attempts – threatened to erase Milwaukee from the picture in the third.

But Phoenix turnovers kept the game within reach for the Bucks, even as the Suns surged on a 9-3 run to end the period.

Booker had a game-high 20 points in the first half on 8-of-15 shooting, and Middleton led Milwaukee with 16. The game was tied at 52-all. – Rappler.com