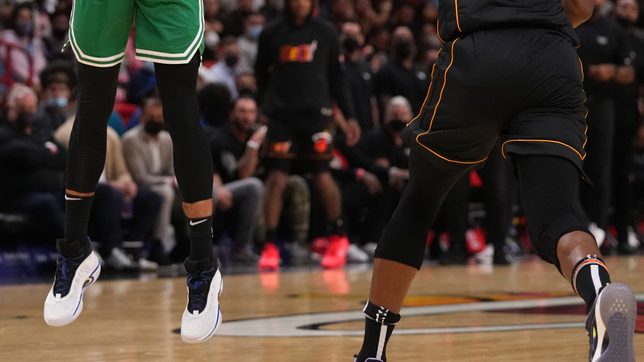 Dennis Schroder scored 14 points, Aaron Nesmith had 13, and Romeo Langford chipped in 12 for Boston, which won its second straight following a three-game losing streak. Al Horford and Jayson Tatum had 10 points apiece for the Celtics, whose four wins have all come on the road.

Kyle Lowry had 6 points, 7 rebounds, and 5 assists for Miami before leaving at the end of the third quarter due to a sprained left ankle.

Robert Williams III grabbed 10 rebounds for the Celtics, who trailed 24-18 after the first quarter.

Robinson made three triples in the first 12 minutes for Miami but finished 5-of-17 from beyond the arc.

Miami was uncharacteristically sloppy in the second quarter, when Boston capitalized on five Miami turnovers in the first four minutes to move ahead 31-29.

Brown put up 11 points in the first half for Boston, which outscored Miami, 33-9, in the second quarter. The 9 points marked the Heat’s lowest-scoring quarter since January 3, 2020.

The Celtics maintained their lead in the third quarter with Nesmith leading the way. Nesmith had scored a total of 3 points on the season before making three three-pointers on Thursday.

Brown left the game in the fourth quarter with hamstring tightness. Coach Ime Udoka said Brown would be reexamined Friday.

Tatum, who entered the contest averaging 24.3 points per game, was held to 3-of-13 shooting. His first basket came with 8:35 left in the game, when his three-pointer gave Boston a commanding 22-point lead. – Rappler.com