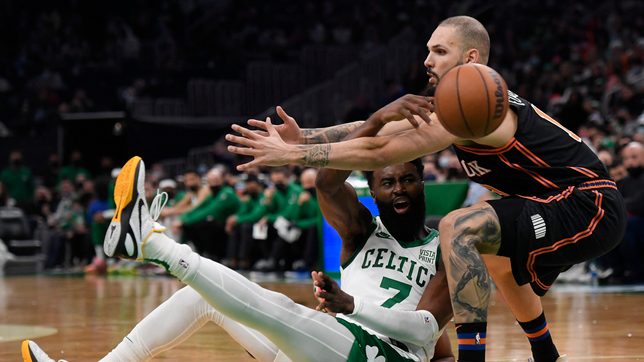 ALL OUT. Celtics guard Jaylen Brown passes the ball past Knicks' Evan Fournier during the second half.

Jaylen Brown contributed 23 points, Payton Pritchard added 16, and Robert Williams III scored 15 with 8 rebounds for the Celtics. Boston won for the second time in three games after losing four of its previous five.

A combined 12 players between New York and Boston were sidelined for the game in the NBA’s health and safety COVID-19 protocols.

Boston led by as many as 16 in the first half and held a 62-47 advantage at halftime.

Richardson’s three-pointer with 10:16 remaining put the Celtics ahead 91-89 and sparked a 16-8 surge to push their lead to seven. Burks’ trey with 4:15 left pulled the Knicks within 105-102 before back-to-back layups by Williams III.

A 9-5 push to end the game sealed the win for Boston.

Boston plays the fourth of five straight games at home against Philadelphia on Monday. New York opens a three-game homestand versus Detroit on Tuesday night. – Rappler.com