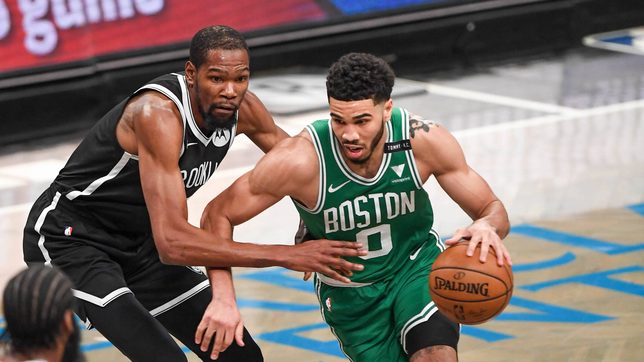 Facebook Twitter Copy URL
Copied
The Nets rally past the Celtics with Kevin Durant, James Harden, and Kyrie Irving playing together only for the ninth time this season

Kevin Durant recorded 32 points and 12 rebounds to help the Brooklyn Nets notch a 104-93 victory over the visiting Boston Celtics in the opening game of the Eastern Conference first-round playoff series on Saturday night, May 22 (Sunday, May 23, Manila time).

Kyrie Irving scored 29 points and James Harden added 21 points, 9 rebounds, 8 assists, and 4 steals for the second-seeded Nets. The contest was just the ninth in which Durant, Harden, and Irving played together.

Jayson Tatum scored 22 points for seventh-seeded Boston but he was just 6-of-20 from the field.

Game 2 is Tuesday on the Nets’ home floor.

Joe Harris added 10 points for Brooklyn, which shot 41.7% from the field, including 8-of-34 from three-point range.

Boston was within 82-79 after two free throws by Jabari Parker with 7:27 left before the Nets responded with nine straight points.

Irving scored five in a row and Durant followed with a fastbreak dunk to make it a 10-point margin with 5:48 left. Irving capped the burst with two free throws to make it 91-79 with 5:08 remaining.

Brooklyn trailed 53-47 at halftime but came out storming in the third quarter with seven straight points and 18 of the first 22.

Tristan Thompson and Walker scored back-to-back baskets as Boston went back ahead at 57-54 before the Nets ripped off 11 straight, capped by Harden’s three-pointer to give Brooklyn a 65-57 advantage with 7:16 remaining.