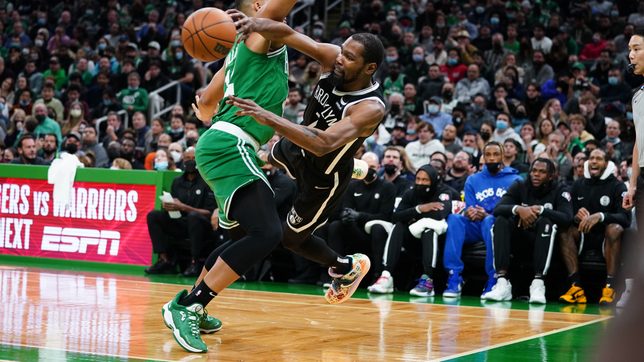 James Harden totaled 20 points, 11 assists, and 7 rebounds for the Nets, who have won four straight and seven of their past eight games.

Durant’s first basket, on a pull-up jumper at 10:05 of the opening quarter, moved him past Allen Iverson (24,368 points) into 25th place on the NBA’s all-time scoring list.

Durant finished the night with with 24,388 points.

LaMarcus Aldridge had 17 points and 9 boards and Cam Thomas chipped in 13 points for Brooklyn.

Marcus Smart finished with 20 points and 8 assists to pace the Celtics. Boston’s leading scorer, Jayson Tatum, made just 4-of-16 shots to wind up with 15 points, and Dennis Schroder had just 10 points on 3-of-10 shooting.

Celtics All-Star Jaylen Brown scored 13 points after being a game-time decision due to injury management. Brown had 19 points in Boston’s win over the Houston Rockets on Monday after missing eight games with a right hamstring strain.

Brooklyn led 62-49 at halftime and was up by as many as 29 points in the third quarter. Boston cut it to 12 early in the fourth, but the Nets scored the next 5 points.

Al Horford’s triple at 10:26 of the first quarter tied the game at 3 before Durant’s jumper gave Brooklyn the lead for good.

Boston visits San Antonio on Friday night as it plays seven of its next eight games away from home. Brooklyn opens a four-game homestand against Phoenix on Saturday. – Rappler.com

Looking for sportswear? Get them at discounted rates using these Adidas voucher codes.