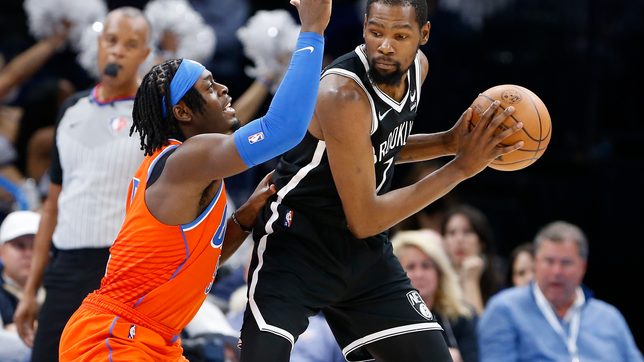 THUNDER PROBLEM. Kevin Durant proves a thorn on the side of his former team Thunder.

In four of their five wins this season, the Thunder have come back from a deficit of at least 16 points. Once again, Oklahoma City found itself in a big hole, as Brooklyn stretched its lead to 20 early in the fourth quarter.

Ty Jerome ignited a bit of a comeback, scoring 8 points in a 17-7 Thunder run to help Oklahoma City cut the deficit to 10 and force Brooklyn coach Steve Nash to insert Durant and Blake Griffin back into the game after Jerome’s three-pointer with just less than six minutes remaining.

But the Nets quickly stretched the lead back out, with a 12-2 run over the next three minutes with 6 points each from Durant and Mills.

Brooklyn started building a lead early in the contest, with 10 first-quarter points by Durant.

Luguentz Dort, the star of Oklahoma City’s last two wins, got off to a hot start offensively, scoring 11 in the opening quarter while also making his mark on defense.

Dort got into foul trouble in the second quarter, though, including picking up his third foul midway through the period on a play challenged by Thunder coach Mark Daigneault. Daigneault challenged the foul, which was originally called on Josh Giddey. Instead, it was switched to a foul on Dort.

But facing a team with the Nets’ offensive firepower, Daigneault opted to stick with Dort, who soon picked up his fourth foul.

James Harden, coming off his biggest game of the season, had 19 but was just 1-of-8 from behind the arc.

Durant scored 13 of his points from the free throw line as the Nets had 20 free throws to Oklahoma City’s 10. – Rappler.com