Big game for Giannis Antetokounmpo as Bucks down Thunder 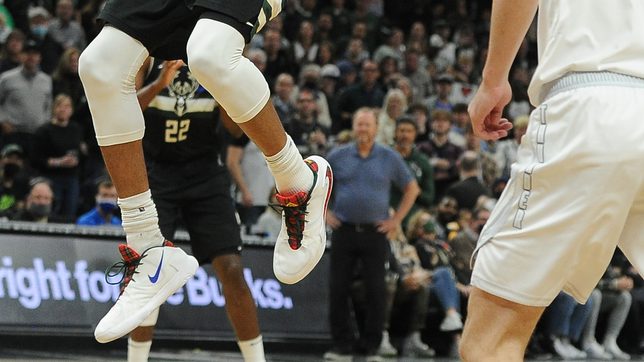 DOUBLE-DOUBLE. Giannis Antetokounmpo made a double-double of 21 points and 19 rebounds.

Giannis Antetokounmpo had 21 points and 19 rebounds to help the Milwaukee Bucks to a 96-89 win over the visiting Oklahoma City Thunder on Friday night, November 19.

Antetokounmpo added seven assists and four blocks to help the Bucks to their second consecutive win despite shooting a season-low 37.3% from the floor.

After scoring 58 points in the first, the Bucks had just 38 in the second half. Bobby Portis added 17 points and 13 rebounds.

Milwaukee led by 20 with just under five minutes to go in the third quarter.

From there, though, Oklahoma City steadily cut the lead thanks in part to a flurry of Bucks turnovers.

Early in the fourth, the Thunder cut the deficit to single digits for the first time since the first quarter with back-to-back three-pointers off turnovers.

Oklahoma City pulled within two with eight minutes remaining but couldn’t get any closer.

Shai Gilgeous-Alexander led Oklahoma City with 17 points but shot only 5 of 20 from the floor and 2 of 12 from beyond the arc. Josh Giddey and Mike Muscala had 14 each.

The Bucks got off to a quick start, scoring the game’s first 13 points.

Antetokounmpo had a pair of assists in the opening stretch.

The Thunder missed their first five shots – three from beyond the three-point line – before finally scoring nearly four minutes into the game.

Milwaukee led by as many as the 17 points in the first.

Luguentz Dort got off to a hot start once again for Oklahoma City, scoring seven points in the first.

But Dort didn’t score again until his three-pointer pulled the Thunder within four with just over nine minutes to play.

The game was the head coaching debut for Dave Bliss, who will serve as the Thunder’s acting head coach during their three-game road trip.

Bliss grew up in Wausau, Wisconsin, about 185 miles from Milwaukee.

Oklahoma City head coach Mark Daigneault isn’t with the team during the road trip, as his wife is expecting a child. – Rappler.com