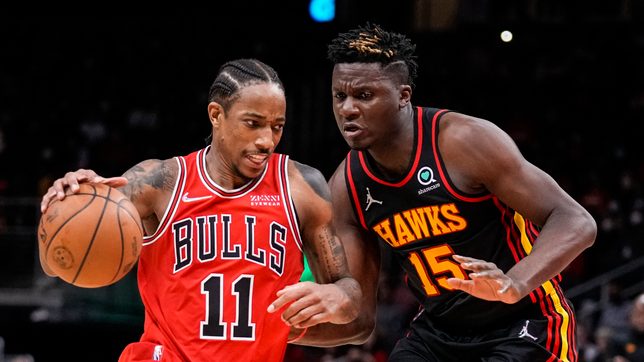 STAR SCORER. DeMar DeRozan scores 20-plus points for the 23rd game this season.

It was the fourth straight win for Chicago, which ended a three-game losing streak to Atlanta. The Hawks took their eighth consecutive home defeat overall.

DeRozan scored 35 points, his 23rd game with 20-plus points, and had 10 assists. LaVine scored 30 points, his 10th game with 30-plus this season, and 9 assists. Vucevic had 24 points and 17 rebounds. The Bulls made a season-high 18 three-pointers.

Atlanta received good news minutes before tipoff when leading scorer Trae Young was cleared to play. Young, who averages 27.3 points and 9.3 assists, had missed three games while in COVID-19 protocols. He scored 29 points and dished out 9 assists.

The Hawks’ Cam Reddish scored 33 points and made a career-high 8 three-pointers. Bogdan Bogdanovic scored 20 and Gorgui Dieng had 12.

The Hawks came out hot, with Young scoring 12 and Reddish adding 11 in the first quarter, which ended with Atlanta leading 36-31. But as the Hawks began to go to the bench, the Bulls started to assert themselves, going on a 23-12 half-ending run. LaVine had 23 and DeRozan had 21 in the first half, with Chicago taking a 69-63 halftime lead.

The Bulls led 98-87 after three quarters, but the Hawks cut the lead to 3 points on a three-pointer by Reddish with 7:43 to go, only to have Vucevic answer with a three-pointer. Atlanta never got that close again.

The Hawks continued to lose players to COVID protocols, the latest being forward John Collins. He was replaced in the starting lineup by Chaundee Brown Jr., who signed a 10-day contract hours before the game started.

Chicago’s Lonzo Ball, Avery Bradley, and Alfonzo McKinnie were out due to COVID protocols.

The Bulls and Hawks will meet again on Wednesday in Chicago. – Rappler.com