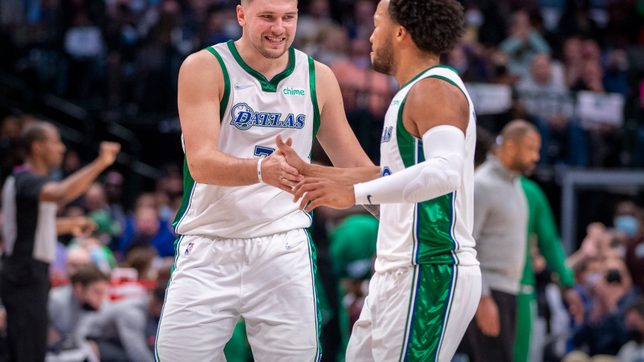 Luka Doncic made the game-winning three-pointer as time expired and had a game-high 33 points to help the Dallas Mavericks hold off the visiting Boston Celtics, 107-104 on Saturday night, November 6 (Sunday, November 7, Manila time).

Doncic dribbled the length of the court before heaving up a fadeaway trey from the wing in triple coverage to win it.

Kristaps Porzingis added 21 points and 7 rebounds in his return after missing the last five games with lower back tightness.

Reggie Bullock and Jalen Brunson added 13 points apiece for Dallas, which earned its sixth win in nine games this season.

Jayson Tatum had 32 points and 11 rebounds to pace the Celtics. Dennis Schroder finished with 20 points and 6 assists, Robert Williams chipped in 16 points with 8 rebounds, and Al Horford scored 14 for Boston.

Boston was without All-Star forward Jaylen Brown, who left the team’s win at Miami on Thursday due to right hamstring tightness.

The loss snapped a two-game winning streak for the Celtics.

The Mavs reopened a double-digit lead late in the third and were up 96-88 after Doncic’s step-back jumper with 6:56 remaining in the game. The Celtics rallied again with a 16-6 push to take their first lead at 104-102 on Smart’s jumper with 2:12 left.

Porzingis’ putback dunk tied it at 104 with 1:39 left for Dallas before Doncic hit his winning three.