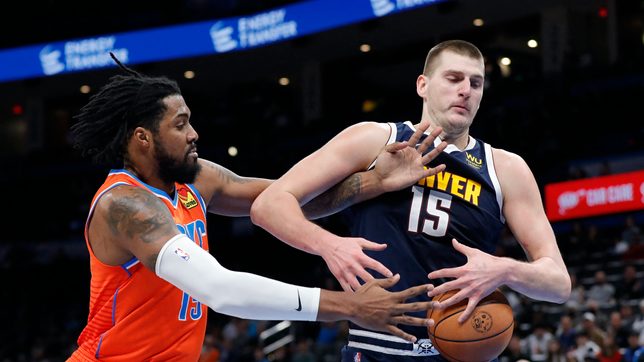 STEPPING UP. Nikola Jokic delivers when the Nuggets needed him the most.

Nikola Jokic had 22 points, 18 rebounds, and 6 assists to lead the Denver Nuggets to a 99-95 win over the host Oklahoma City Thunder on Sunday, January 9 (Monday, January 10, Manila time).

Jokic had answers when the Nuggets needed them, carrying them in the third quarter when the offense disappeared and then answered again in the final minute.

Moments after the Thunder’s Mike Muscala tied the game at 95 in the final minute, Jokic attacked the basket, earning his way to the free throw line, where he put Denver back in front.

A pair of Oklahoma City misses helped the Nuggets hold on for their second consecutive victory.

The loss was the fourth consecutive for the Thunder.

Jokic had 9 of his rebounds in the fourth. Oklahoma City was just 1-of-9 from beyond the arc in the fourth, though, and did not attempt a free throw.

Austin Rivers scored a season-high 22 off the bench, hitting 6 three-pointers, while Jeff Green added 16 and Barton 14 – 8 of them in the first three minutes of the game.

Luguentz Dort led the Thunder with 14 points but was just 1-of-9 from beyond the arc.

Josh Giddey had 11 points, 7 rebounds, and 8 assists. Oklahoma City had a season-high 29 assists.

Denver led by as many as 18 points in the first quarter and 12 at the break.

But the Thunder came on strong coming out of halftime, continuing what has become a trend for the Nuggets.

Dort had been quiet offensively in the first half, but he led the way for Oklahoma City’s comeback, scoring 11 in the frame.

Dort’s free throws with just less than three minutes remaining in the third tied the game for the first time since it was scoreless.

A few moments later, Giddey gave the Thunder their first lead with a three-pointer.

The Nuggets built a big lead early with a flurry of three-pointers, going 10-of-19 from beyond the arc in the first half.

But in the second half, Denver’s success from deep dissipated, as the Nuggets shot just 17.6% on three-pointers (3-of-17).

The Nuggets managed just 38 points after the break. – Rappler.com