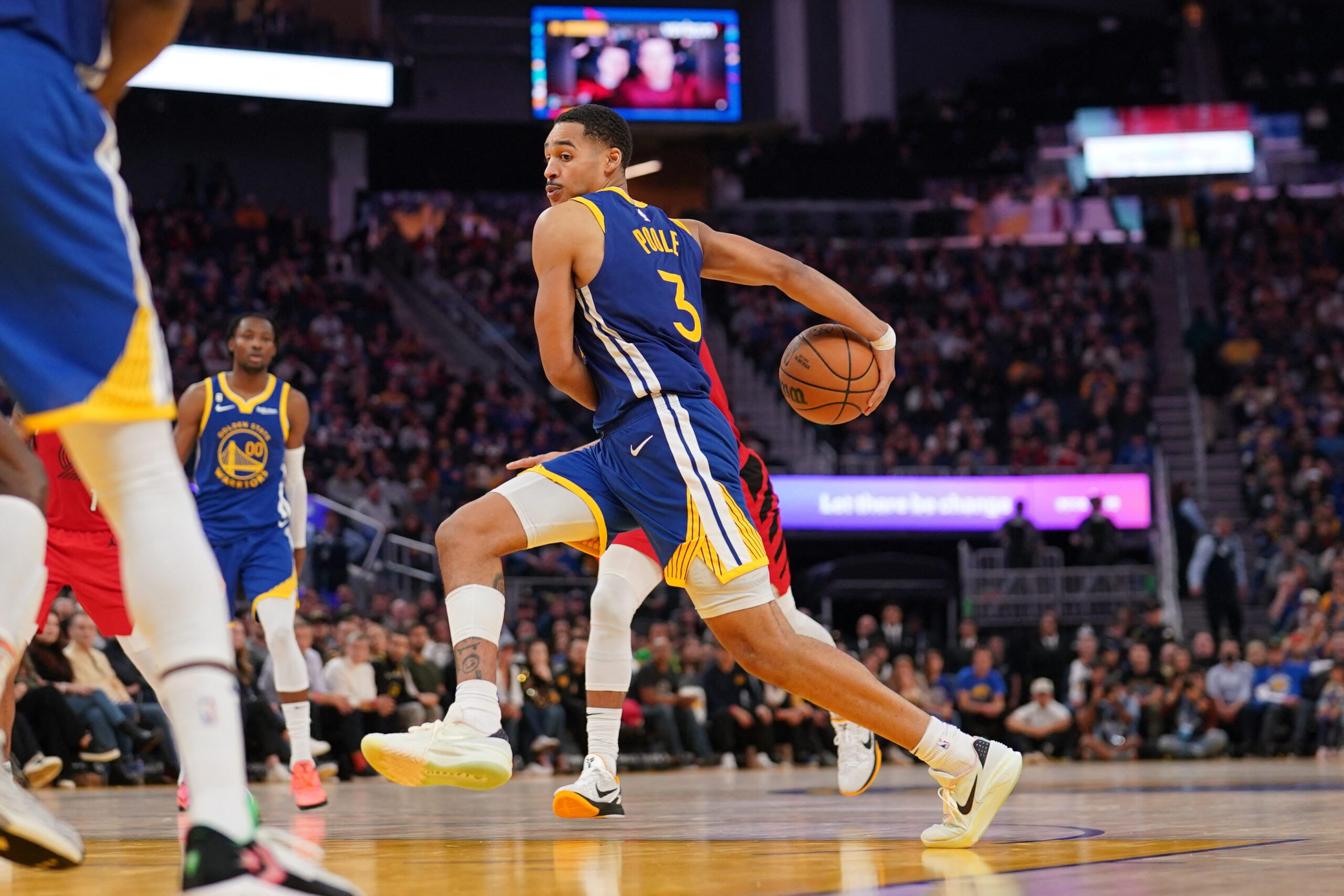 COME FROM BEHIND. Warriors guard Jordan Poole fakes a pass behind his back against the Trail Blazers in the fourth quarter.

Facebook Twitter Copy URL
Copied
Even with Steph Curry still sidelined, the Warriors unleash a string of three-pointers in a furious 16-2 closeout against the Trail Blazers

Jordan Poole exploded for 41 points and teamed up with Klay Thompson and Donte DiVincenzo for 3 three-pointers in a 16-2, game-ending flurry that allowed the Golden State Warriors to rally past the Portland Trail Blazers, 118-112, in San Francisco on Friday, December 30 (Saturday, December 31, Manila time).

After the teams traded 40-plus-point quarters – the Warriors had a 41-point first period that helped them go up by 18, the Trail Blazers a 40-point third canto that vaulted them into an 11-point lead – Portland took a 110-102 advantage on a Damian Lillard floater with 5:10 remaining before Golden State flipped the script.

Poole began the game-ending blitz with a short jumper at the 4:14 mark, after which Golden State’s Jonathan Kuminga dunked and Poole connected from three-point range to make it a one-point game.

While Portland was going 4:08 without a point, Kuminga dunked again to give Golden State a lead it never relinquished. Thompson connected on a triple that made it a 114-110 game with 1:36 to go.

Lillard hit from the interior to end the Portland drought and cut the deficit in half with 1:02 to play, and the Trail Blazers had a chance to draw even when Poole lost the ball out of bounds.

However, DiVincenzo then stole the ball from Lillard and, 16 seconds later, produced the crushing blow with a three-pointer that left the Trail Blazers in a 117-112 hole with 24.1 seconds to go.

Poole completed the game’s scoring with a free throw, leaving his point total 2 shy of the career high he established 12 days ago in Toronto.

He also contributed 5 rebounds and a team-high 6 assists for the Warriors, who were once again without Stephen Curry (shoulder) and Andrew Wiggins (non-COVID illness).

Thompson finished with 31 points after hitting 7 three-pointers for Golden State, which won its fourth straight at home over the past six days. The Warriors outscored the Trail Blazers, 51-36, from beyond the arc.

Draymond Green logged 10 points and a game-high-tying 11 rebounds, while Kevon Looney also grabbed 10 boards as the Warriors took advantage of the absence of Portland big man Jusuf Nurkic, out because of a non-COVID illness.

Lillard poured in a team-high 34 points in another of his San Francisco Bay Area homecomings. Anfernee Simons returned from a scary fall to chip in 22 points for Portland, which lost for the fourth time in its past five games.