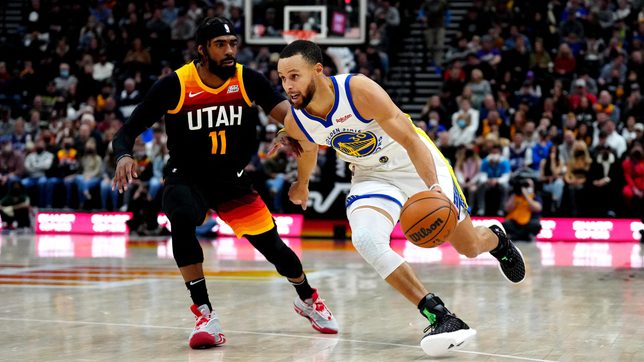 Curry hit 6-of-12 from deep to break his own NBA record by making a three-pointer for the 158th consecutive game.

Curry scored 12 points in the fourth quarter as the Warriors rallied from an eight-point deficit – after surrendering a second-half 16-point lead – to overtake the Jazz.

Andrew Wiggins scored 25 and Otto Porter Jr. added 20 for the Warriors, who played without Draymond Green (health and safety protocols).

Rudy Gobert led the Jazz with 20 points and 19 rebounds, while Donovan Mitchell, Bojan Bogdanovic, and Jordan Clarkson also each scored 20.

Utah shot 43.5% to the Warriors’ 53.5%, leading to the end of a six-game winning streak. The Jazz were on the second night of a back-to-back set, after beating Minnesota on Friday. Golden State hadn’t played since Tuesday.

The Warriors roared ahead by five after trailing by eight earlier in the fourth, but the Jazz tied it at 111-111 on a Bogdanovic three.

Curry then hit a jumper and a three-pointer to give the Warriors their five-point lead back heading into the final minute. Andre Iguodala nailed a key triple in the final minute, and Curry sealed the win from the free-throw line.

Mitchell, now in his fifth season, moved into the top 10 list for all-time scoring in Jazz history.

Gary Payton II, who played junior college basketball at Salt Lake Community College, began the second half with an alley-oop dunk from Kevon Looney for a 66-50 lead.

The game then took a wild turn.

In a 49-second span, the Jazz scored eight straight on threes from Conley and Royce O’Neale followed by a Bogdanovic basket. Conley concluded the 10-0 run 35 seconds later, bringing the Jazz within six.

Curry made a 30-foot triple to end that Jazz spurt, but the home team got right back to it. Utah went on a 19-5 run to take a five-point lead that it maintained going into the fourth quarter.

Utah went up by eight after a Conley trey early in the fourth quarter, but the Warriors attacked the basket with Gobert taking a breather and scored seven straight to set up the back-and-forth finish. – Rappler.com