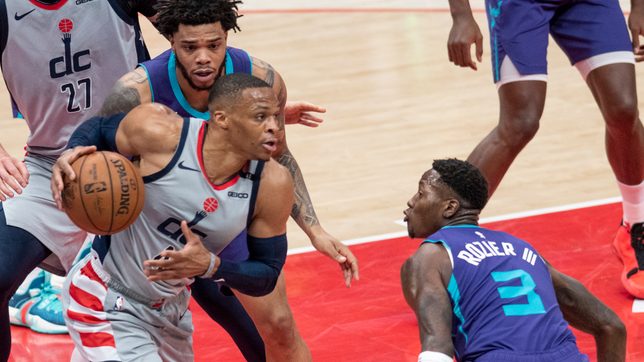 The Hornets spoiled another record night for Wizards guard Russell Westbrook, who posted a triple-double of 22 points, 15 rebounds, and 15 assists. The feat made the former MVP the first Wizards player to record a 20-15-15 statline.

A night earlier, Westbrook also dropped 35 points, a season-high 21 assists, and 14 rebounds in a win over the Indiana Pacers. It was the first triple-double in league history with 35+ points and 20+ assists.

Devonte’ Graham added 17 points and Cody Zeller, coming off the bench, provided 16 points and 13 rebounds as the Hornets won for the fourth time in their last 5 games.

Rui Hachimura poured in 30 points on 12-for-25 shooting for the Wizards, who were denied their first three-game winning streak in more than a month.

Robin Lopez, who shot 8-of-11 on field goals, had 16 points, Jerome Robinson notched 12 points and Alex Len had 10 points.

Washington, playing again without injured team scoring leader Bradley Beal, shot 41% from the field, with Westbrook checking in at 7-for-20. The Wizards were 10-for-37 on threes.

Charlotte led 98-87 with less than 7 minutes to play. Then the Hornets missed 3 shots and committed a turnover on their next 4 possessions, allowing the Wizards to close within 98-95.

Rozier drained a pair of jumpers for the game’s next 4 points. That sparked a 9-2 outburst, capped by Rozier’s three-pointer at the 1:53 mark. In the last 42 seconds, Charlotte made 5-of-6 free throws.

Rozier finished 5-for-10 on threes, while Hayward, who grabbed 11 rebounds, was 3-for-3 from long range. Graham was 3-for-9 on three-pointers. Hayward and Graham each had 6 assists.

Earlier, the Hornets were buzzing on offense in putting up a 64-56 halftime lead. Washington was within 77-75 with slightly more than 3 minutes to play in the 3rd quarter.

Westbrook was charged with 5 of Washington’s 13 turnovers.

Charlotte is 2-0 against the Wizards this season. – Rappler.com