Mitchell, Clarkson still too much for Grizzlies as Jazz win again 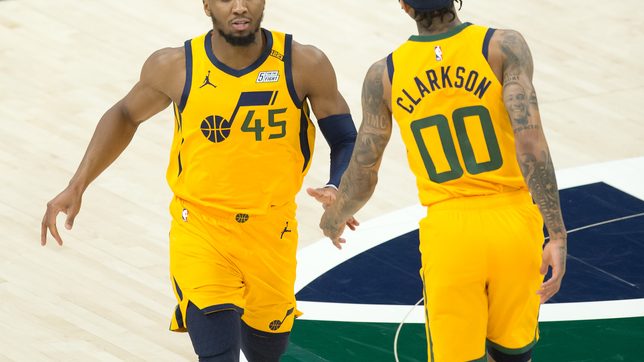 ON KEY. Jazz stars Donovan Mitchell and Jordan Clarkson quickly get into the groove against the Grizzlies.

Jordan Clarkson chipped in 28 points off the bench and Rudy Gobert finished with 16 points and a game-high 14 rebounds for the Jazz, who held a league-best 34-11 record after recording a third sweep in 4 tries in the NBA’s new back-to-back scheduling .

Kyle Anderson had a team-high 16 points for the Grizzlies, who hung with the Jazz all the way before losing 117-114 in the opener on Friday.

Even without Mike Conley, who was given the night off, the Jazz took command of the rematch almost immediately after the visitors had opened the game on an 8-2 run.

With Mitchell contributing a three-point hoop, a three-point play, and two free throws, Utah rallied into a 13-11 lead and never looked back. Moments later, the Jazz pulled away, using another trey and three-point play from Mitchell and going up by 20, 39-19, by period’s end.

Memphis, which had won 3 in a row before arriving in Salt Lake City, briefly got within single digits midway through the 2nd quarter but never mounted a serious threat.

Mitchell shot 12-for-17 overall and 5-for-7 on three-pointers en route to the same point total he had in Friday’s win. The consecutive games of 35 or more points were the third of his career, the most recent coming last February with 38 against Phoenix and 37 against Boston.

Ingles and Royce O’Neale also scored in double figures with 15 and 10 points, respectively, for Utah, which won its fifth straight overall and 19th in a row at home.

Jonas Valanciunas recorded a 13-point, 11-rebound double-double for the Grizzlies, who get a third and final shot at Utah on Wednesday in Memphis.

Ja Morant, whose 32 points kept the Grizzlies in the game Friday, was limited to 12 in the rematch.

Dillon Brooks had 13 points, while Brandon Clarke and De’Anthony Melton added 12 apiece for Memphis, which was outshot 50% to 40.2%. – Rappler.com