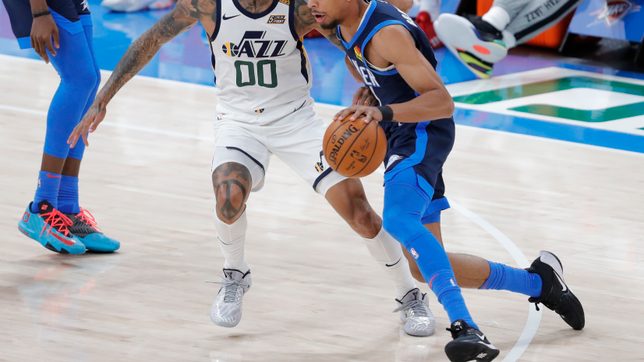 Bojan Bogdanovic buried 22 points to lead the Utah Jazz to a 109-93 road win over the Oklahoma City Thunder on Friday night, May 14 (Saturday, May 15, Manila time).

Rudy Gobert added 16 points and 18 rebounds to help the Jazz (51-20) inch closer to clinching the top spot in the Western Conference.

A Utah win in Sunday’s regular-season finale or a loss by Phoenix in either of its last two games – both at San Antonio – would give the Jazz the top record in the NBA.

It would be Utah’s first time finishing as the top seed in the Western Conference since 1997-1998. The Jazz have never finished with the NBA’s best record.

It didn’t take Mike Conley long to make an impact in his first game back since April 26. Conley, who had missed nine games with a hamstring injury, had assists on each of Utah’s first two possessions.

While Utah has performed well during their absences, the returns of Conley and Donovan Mitchell figure to play big roles in deciding how far the Jazz can go in the postseason.

Mitchell, who hasn’t played since April 16 with a sprained right ankle, is expected to return for the playoffs.

Conley played just more than 16 minutes, all in the first half. He finished with 10 points and three assists.

Jordan Clarkson made four three-pointers and finished with 18 points for the Jazz.

Oklahoma City cut the Jazz lead to seven early in the third after Svi Mykhailiuk scored nine points in the first five minutes of the quarter.

For the seventh time in nine games, the Thunder failed to reach 100 points. Oklahoma City also tied its season low with 13 assists.

The Jazz scored 15 points on the Thunder’s 15 turnovers. – Rappler.com