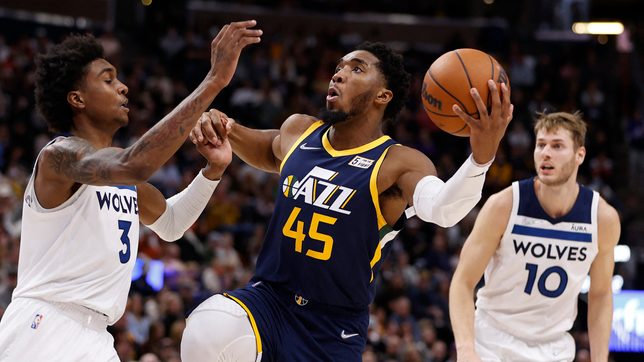 Malik Beasley led all scorers with 33 points and D’Angelo Russell chipped in with 19 points, 14 assists and seven rebounds for Minnesota, which was limited because of COVID-19.

The Timberwolves were without seven players in all and four starters due to the NBA’s health and safety protocols. The missing players included late scratch Karl-Anthony Towns, Patrick Beverly, Anthony Edwards, Jarred Vanderbilt, Josh Okogie, Taurean Prince and McKinley Wright.

Bojan Bogdanovic scored 18 points for the Jazz, who have won 10 of their past 12 games.

Jaylen Nowell kept the Timberwolves in the thick of things during the first quarter when he scored eight points in a two-minute span. Utah then scored 10 of the final 13 points in the quarter, including a buzzer-beating floater by Conley, to take a 35-27 lead.

The Jazz couldn’t shake the Timberwolves in the second quarter either, as Jake Layman cut the halftime lead to seven, 67-60, with a late 3-pointer.

The third quarter featured a shooting showdown between Bogdanovic and Russell. The Jazz forward was hot to open the second half, hitting four 3s in the first 5-1/2 minutes. Russell went off for 11 points of his 19 points, including three triples, in the quarter.

The Jazz went up by 14 before settling on an 11-point lead heading into the final quarter.

Each of the Timberwolves’ starters scored in double digits. Naz Reid had a double-double of 17 points and 10 rebounds, Jaden McDaniels scored 16 with nine rebounds and seven assists, and Layman added 13 points and seven boards. – Rappler.com