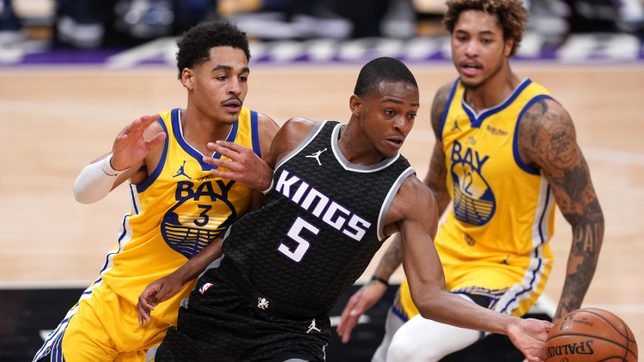 SIZZLING. Kings guard De'Aaron Fox gets his way over the Warriors.

A third straight Kings win, coupled with a third consecutive Warriors defeat, allowed Sacramento (20-25) to move within two games of Golden State (22-23) in their bids to make the Western Conference playoff field.

Fox’s point total was one more than his previous career best, recorded on January 17 against the New Orleans Pelicans. He was coming off consecutive 30-plus-point efforts, including a 37-pointer in a narrow home win over the Atlanta Hawks on Wednesday night.

Playing against a Warriors team missing not only Stephen Curry (bruised tailbone) but also Draymond Green, who apparently had an adverse reaction to a COVID shot, the Kings seized command in the 2nd quarter and pulled well clear in the 3rd.

The 141-point total was 13 more than their previous season high, set January 6 against the Chicago Bulls.

Fox shot 16-of-22 for the Kings, who successfully avenged a 137-106 shellacking at the hands of Golden State at San Francisco on January 4.

The winner of the season series will be determined when the Northern California rivals meet one final time on April 25 in San Francisco.

Sacramento’s Richaun Holmes chipped in with 25 points to go with a game-high 11 rebounds while Haliburton had 21 points, Kyle Guy 17 and Buddy Hield 16.

The Kings will aim for a fourth straight win Saturday at home against the Cleveland Cavaliers.

Andrew Wiggins had 26 points and a team-high 10 rebounds for the Warriors, who were playing the first night of a back-to-back. They host the Hawks on Friday.