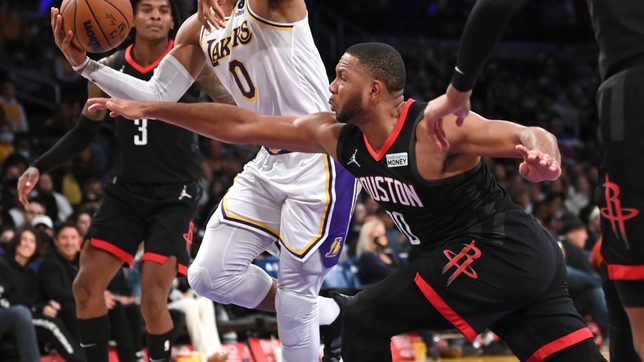 LeBron James added 15 points, eight assists and seven rebounds for the Lakers, who led by as many as 28. The teams meet again at the Staples Center on Tuesday.

Anthony made 5 of 8 attempts from 3-point range in 25 minutes and is averaging 25.0 points over his last three home games. Anthony Davis recorded 16 points and 13 rebounds.

Eric Gordon scored 17 points for Houston and Christian Wood chipped in 16 points and 13 rebounds. The Rockets committed a season-high 25 turnovers while shooting 21.4% (6 of 28) from beyond the arc.

Anthony made 3 of 4 3-point attempts in the first quarter to help the Lakers take a 27-15 lead.

Los Angeles set the tone by forcing eight turnovers in the first 12 minutes and limiting Houston to 27.8% (5 of 18) shooting.

The second quarter brought more of the same from the Lakers, whose highlight reel included a reverse dunk by James that extended the lead to 40-24 with 7:05 remaining in the half.

The Lakers were 8-of-15 shooting from 3-point range in the first half and took a 54-35 lead into the break.

Los Angeles has won two straight since blowing a 26-point lead in a 123-115 loss to Oklahoma City last Wednesday.

The Lakers avoided a similar collapse against the Rockets and moved ahead 61-44 on James’ dunk with 7:31 to play in the third quarter.

Dwight Howard sat out with neck stiffness for Los Angeles, which led 75-54 after three quarters.

Kevin Porter Jr. had 13 points and nine rebounds for Houston while Kenyon Martin Jr. scored 12 points in 16 minutes off the bench.

Houston pulled within 11 points with 3:58 remaining after Martin capped a 21-4 run with an alley-oop dunk.