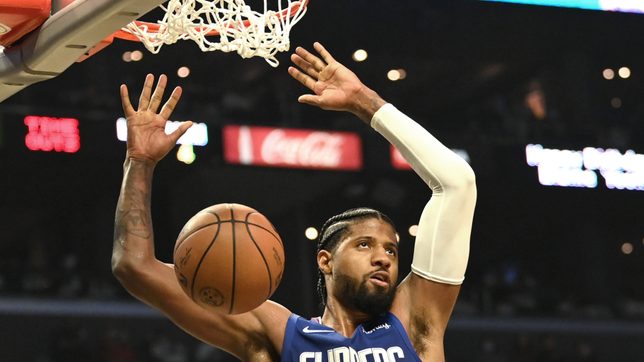 COME-FROM-BEHIND. Paul George drops 27 of his 32 points in the second half of the Clippers' comeback win.

The Clippers trailed by as many as 15 points in the first half but surged ahead of the youthful Thunder in the game’s final 2 1/2 minutes.

Guard Shai Gilgeous-Alexander, who began the night averaging 22 points, most on the Thunder, posted a team-high 28 points on 11-of-23 shooting from the field. Rookie Josh Giddey recorded 15 points and 7 assists, Darius Bazley contributed 15 points, and Aleksej Pokusevski added 9 points off the bench.

The Clippers improved to 2-4 on the year, while Oklahoma State dropped to 1-6 and remained winless in four road games.

The Clippers trailed 83-77 with just over seven minutes remaining, but they made one last run, tying the game at 91-all on a Kennard three-pointer from the wing with 1:39 left.

After Bazley made one of two free throws, George came down and drained a midrange jumper to give Los Angeles a 93-92 lead. Bazley turned it over on the other end and Jackson hit a driving lay-in to give the Clippers a 95-92 lead that they would not relinquish.

One of the worst shooting teams in the NBA to start the year, the Clippers struggled to put the ball in the basket. Los Angeles shot 38% from the field and 35.7% from the three-point line.

The Thunder’s lead ballooned to 31-16 with just over nine minutes left in the second quarter, but the Clippers trimmed the deficit to 44-40 by halftime.