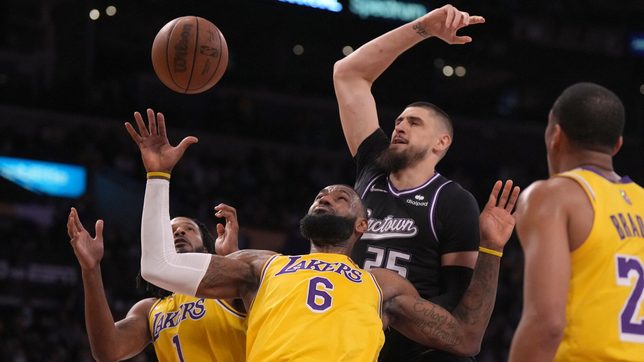 James finished with a game-high 31 points and Monk had 24 as the Lakers won a third straight to open a five-game homestand.

De’Aaron Fox scored a team-high 30 points and Buddy Hield tallied 26 for the Kings, who lost for just the second time in their last five games.

The Lakers trailed 96-89 with 8:11 remaining before riding 14 points from James and 11 from Monk in a 33-18 finish. James hit a pair of three-pointers and Monk three as part of the flurry.

After James and Hield had split four consecutive lead-changing three-pointers, Monk and Tyrese Haliburton exchanged two-point hoops. Monk gave the Lakers the lead for good, 112-110, with a triple with 2:50 to go.

James then added a pair of baskets to increase the lead to six with 52.5 seconds remaining, and Los Angeles held on from there.

Talen Horton-Tucker and Russell Westbrook added 19 points apiece for the Lakers, while Dwight Howard put up a double-double with 14 points and a game-high 14 rebounds.

Hield made seven three-pointers in 13 attempts to account for a majority of his 26 points.

Playing their ninth consecutive game without Anthony Davis (sprained knee), the Lakers led 89-85 on Carmelo Anthony’s hoop in the first minute of the fourth quarter.

The Kings then made a run. Haliburton hit a three-pointer and Davion Mitchell scored twice from the interior in an 11-0 spurt that allowed Sacramento to equal either team’s largest lead of the game, 96-89, with 8:11 remaining. – Rappler.com