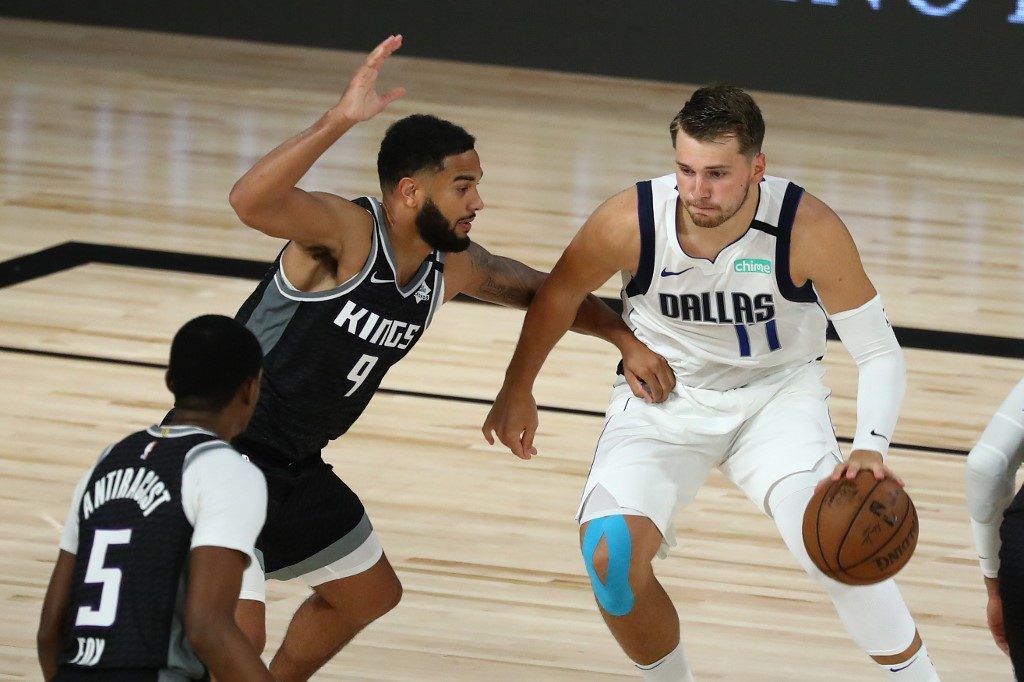 LAKE BUENA VISTA, FLORIDA - AUGUST 04: Luka Doncic #77 of the Dallas Mavericks drives against Cory Joseph #9 and De'Aaron Fox #5 of the Sacramento Kings in the second half of a NBA basketball game at HP Field House at ESPN Wide World Of Sports Complex on August 4, 2020 in Lake Buena Vista, Florida. NOTE TO USER: User expressly acknowledges and agrees that, by downloading and or using this photograph, User is consenting to the terms and conditions of the Getty Images License Agreement. Kim Klement-Pool/Getty Images/AFP

Luka Doncic delivered a monster triple-double performance as the Dallas Mavericks bagged their first win of the NBA’s relaunched season in an overtime thriller against the Sacramento Kings on Tuesday, August 4 (Wednesday, August 5, Philippine time).

The 21-year-old Slovenian scored 34 points, with 20 rebounds and 12 assists as the Mavericks completed a 114-110 victory to get their campaign back on track in the Western Conference.

Tim Hardaway Jr and Kristaps Porzingis also came up big with 22 points apiece as the Mavericks overturned an 11-point deficit to seal victory at the HP Field House on the NBA’s Orlando campus.

Doncic’s masterclass made him the youngest player in NBA history to score a 30-point, 20-rebound, 10-assist triple-double.

“It wasn’t our best game – far from that,” Doncic said. “We fought, we hung in there, we helped each other, we never gave up. We needed that win and you can never count us out for sure.”

“Nothing came easy in this game at all,” Mavericks coach Rick Carlisle added. “It was a struggle, and everybody kept everybody together, and we just kept saying, ‘Hey, we’re going to find a way,’ and guys were encouraging each other.

“Really a well-deserved win for our guys.”

The win saw the Mavericks, who have already guaranteed a playoff place, improve to 41-29 in the Western Conference. – Rappler.com