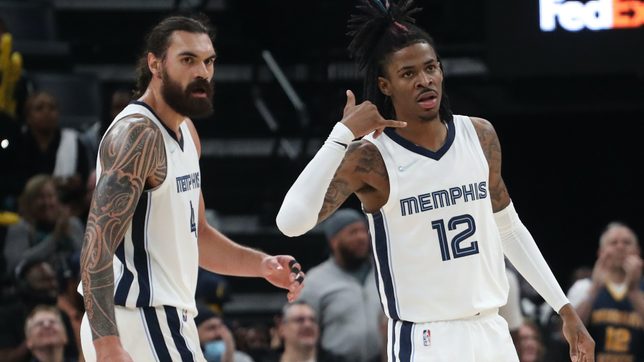 WINNING TRACK. Ja Morant and the Grizzlies return to the winning column after beating the Nuggets.

Facebook Twitter Copy URL
Copied
The Grizzlies protect their home turf, with Ja Morant chalking up 26 points and 8 assists against the Nuggets

Nikola Jokic scored 23 points and Aaron Gordon had 15 points and 10 rebounds despite being hampered by an eye injury he suffered early in the third quarter.

Monte Morris scored 11 points and Michael Porter Jr. had 10 points and 8 rebounds for the Nuggets.

Denver scored the first basket of the fourth quarter to get within 7, but Jones hit a three-pointer, Tillman scored on a finger roll and De’Anthony Melton made two free throws to make it 89-75.

The Nuggets later got within 9 on a three-pointer by Bones Hyland, but Kyle Anderson hit a layup and a jumper in the lane to make it 100-87 with 4:32 left.

Hyland and Morris hit layups to get the deficit under 10, but Morant hit two straight baskets to make it 104-91 and Memphis closed it out from there.

The teams traded buckets at the start of the third quarter, with each team taking the lead. Jokic hit a three-pointer to give Denver a 70-69 lead before Morant hit two short jumpers and then P.J. Dozier made another one from deep to tie it at 73 with 4:08 left in the third.

The Nuggets didn’t score the rest of the period as the Grizzlies hit a trio of three-pointers to go ahead 82-73 heading into the fourth.

Memphis led by 8 when Tillman hit a floater in the lane midway through the second quarter, but the Nuggets clawed back into it.

Jokic scored 4 points and then Gordon scored 3 to pull Denver within 1, and then a Gordon dunk with 27 seconds left in the first half gave the Nuggets a one-point lead. Morant drained a long-range three-pointer to give the Grizzlies a 60-58 lead at the break. – Rappler.com