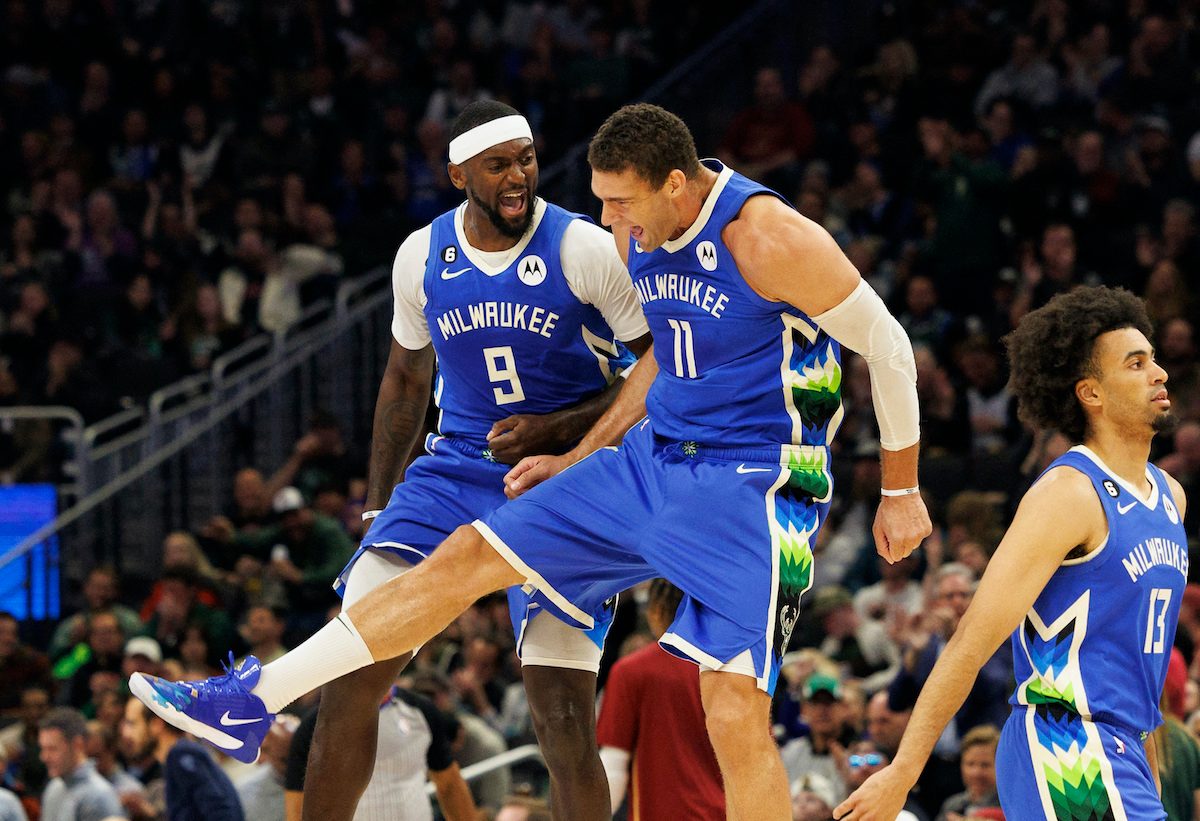 DEADSHOT. Brook Lopez (right) celebrates with Bobby Portis after leading the Bucks past the Cavaliers.

Facebook Twitter Copy URL
Copied
Brook Lopez heats up from deep, while Giannis Antetokounmpo falls short of a triple-double as the Bucks win for the second time in five games

Brook Lopez connected on 7 three-pointers and finished with a game-high 29 points to lead the Milwaukee Bucks past the visiting Cleveland Cavaliers, 113-98, on Wednesday, November 16 (Thursday, November 17, Manila time).

Giannis Antetokounmpo fell just 2 assists shy of a triple-double, finishing with 16 points, 12 rebounds and 8 assists for the Bucks, who won for just the second time in five games after starting the season 9-0.

The Cavaliers, who nearly rallied from a 22-point fourth-quarter hole on Sunday against the Minnesota Timberwolves, fell behind by 20 in the second half Thursday. They pulled within 9 in the fourth quarter but could get no closer, losing their fifth straight after an eight-game win streak.

Donovan Mitchell returned from a one-game absence due to a sprained ankle and finished with 23 points, matching the 23-point effort of teammate Darius Garland.

Early on, it was Cleveland that enjoyed the momentum, building a pair of 10-point leads early in the second quarter. But Lopez rallied the Bucks with 7 points in the period to help the Bucks close the first half with a 61-60 lead.

Milwaukee used a 13-0 run early in the third quarter to build a 75-63 lead as Lopez connected on a pair of key three-pointers. Lopez made all 4 of his shots in the third, including 3 three-pointers as Milwaukee opened a 20-point lead at 91-71.

While one Lopez brother was red-hot for Milwaukee, Robin Lopez and the Cavaliers went cold in the third, missing 10 of their first 11 shots, including a pair of dunk attempts at the rim.

The Cavaliers did a solid job defending Antetokounmpo in the first half, holding him to just 6 points on 1-of-4 shooting.

The Bucks play in Philadelphia Friday before returning home for a four-game homestand beginning Monday against Portland.

The Cavaliers will hope to get back on track when they return home Friday against Charlotte to begin a four-game homestand in a six-day span. – Rappler.com