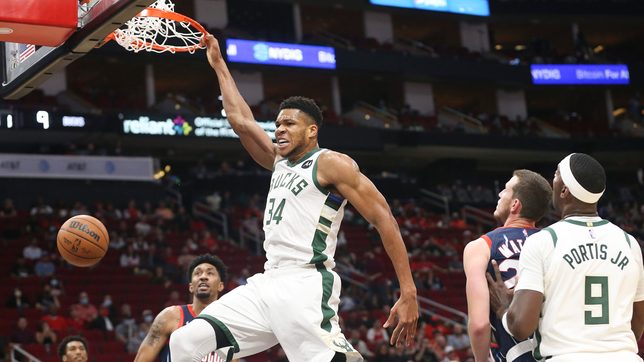 His ability to get downhill caused the Rockets fits throughout and his fingerprints were all over the Bucks’ closing run to victory.

Antetokounmpo nailed a three-pointer, assisted on a Portis corner three, and launched a ferocious dunk with 47.6 seconds left that pushed the lead to 119-112.

Portis scored six points including a corner three during a 10-3 spurt that enabled the Bucks to erase a seven-point halftime deficit.

But for every moment that Milwaukee seemed on the brink of snatching momentum, the Rockets mustered a reply, and when Houston closed the third quarter with three-pointers from Brooks and Josh Christopher, it led 95-90 entering the fourth period.

Antetokounmpo was a terror early, scoring 10 first-quarter points on 5-of-7 shooting to lead a Milwaukee offense that bullied the Rockets inside. The Bucks tallied 18 points in the paint in the period and shot 10-of-12 inside the arc yet led by only three points entering the second period.

That modest margin enabled the Rockets to claw ahead via a 17-4 run that featured three Mathews three-pointers, six points from Sengun and a steal and transition dunk by David Nwaba.

Suddenly the Rockets led 46-38 and Milwaukee needed Middleton to get hot in order to maintain contact. He obliged with 10 points in the second quarter including a trio of three-pointers.

Yet, despite Antetokounmpo and Middleton combining for 31 points on 11-for-18 shooting before the break, Houston led 65-58 following a corner triple by Brooks. It came after Eric Gordon escaped a double team and delivered a nifty cross-court pass to Brooks’ shooting pocket. – Rappler.com