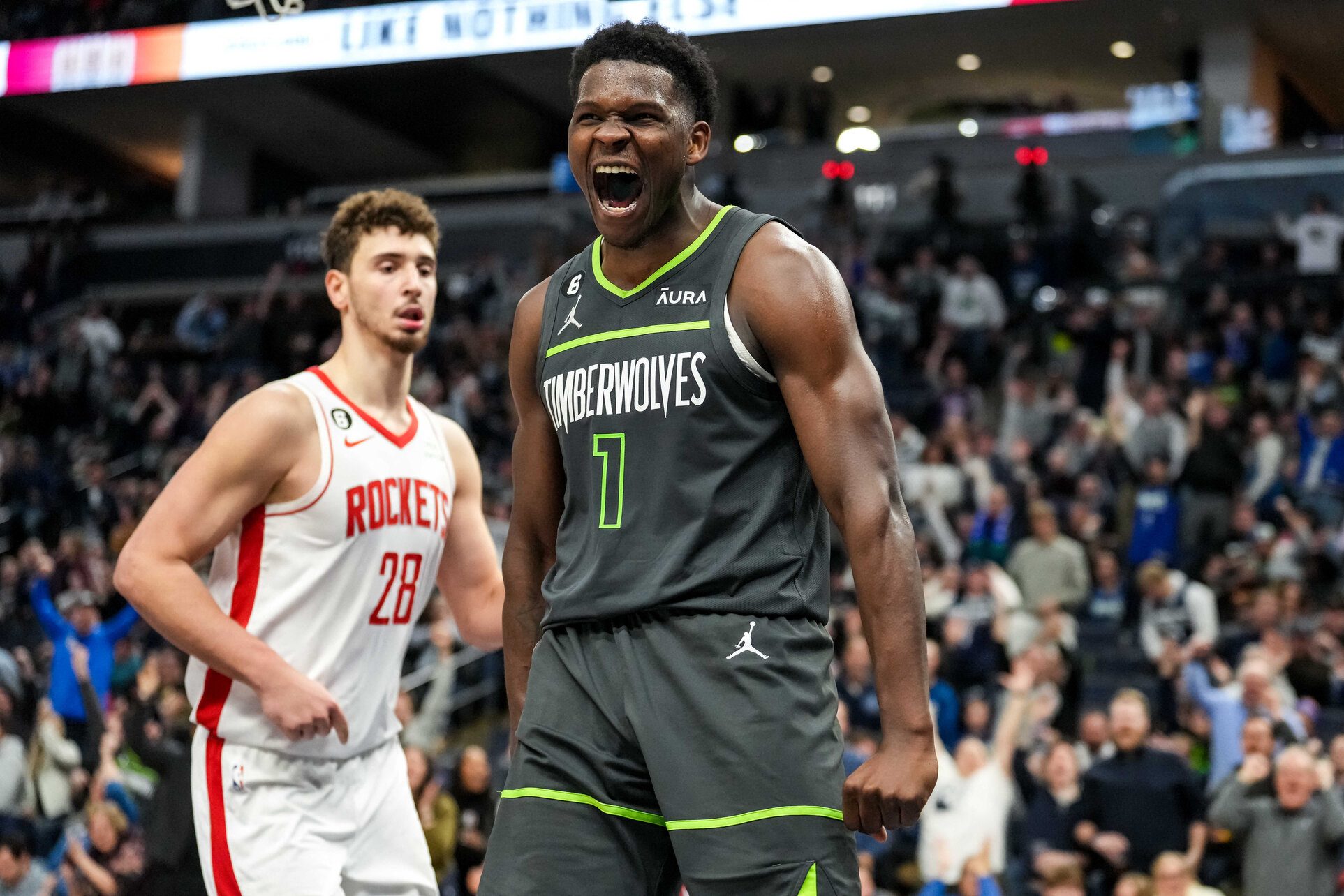 SIZZLING. Timberwolves guard Anthony Edwards celebrates during the third quarter against the Rockets.

The Rockets committed 7 of their 23 turnovers in the fourth quarter to grease the skids of their 13th consecutive loss. The Timberwolves, who have won eight of 11 overall, scored 30 points off those turnovers and improved to 7-1 at home this month.

Edwards shot 17-of-29 and made 8-of-16 three-pointers. He added 6 rebounds, 4 assists, 3 steals, and 3 blocks to his ledger. Nathan Knight scored a season-high 19 points with 3 steals off the bench, helping the Timberwolves overcome the absences of Rudy Gobert and Karl-Anthony Towns.

Alperen Sengun led the Rockets with 19 points, 16 rebounds, and 7 assists, but he scored just one point in the fourth quarter. Jalen Green missed 10-of-13 shots and committed 6 turnovers en route to his 10-point effort.

The Timberwolves used a 12-0 third-quarter run to climb back into contention. Edwards and Knight worked in tandem to erase a 70-59 deficit. Knight sank three free throws in addition to a layup, while Edwards added a layup, dunk and an assist on a Taurean Prince three-pointer.

Edwards scored 16 points in the third. After trailing 68-56 with 8:17 left in the period following an Eric Gordon three-pointer, the Timberwolves carried an 87-84 lead into the fourth.

Minnesota shot just 34.6% in the opening quarter but, courtesy of 8 Houston turnovers, closed the period with a plus-eight advantage in shot attempts that yielded a 26-26 deadlock entering the second period. The Rockets shot 11-of-18 in the frame but labored containing Edwards (10 points) while also allowing Jaylen Nowell to chip in six points off the bench.

After Houston secured its largest lead of the first half at 49-42 on a Jae’Sean Tate three, Edwards responded with a thunderous dunk before Jaden McDaniels stole the inbounds pass and scored to cut the margin to three.

Houston led 52-50 at the break despite missing 6-of-8 free throws while the Timberwolves converted 13-of-16 at the line.

Sengun had a double-double by the intermission (13 points, 11 rebounds) while Edwards had 19 points. – Rappler.com