Aaron Gordon debuts for Nuggets in romp of Hawks 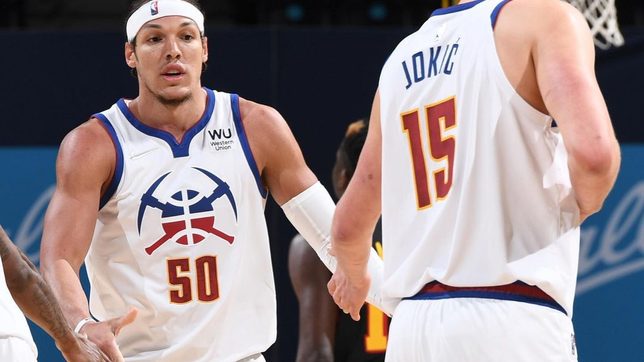 NEW GUY. Aaron Gordon marks his debut for the Nuggets with a win.

Facebook Twitter Copy URL
Copied
Traded by the Magic, Aaron Gordon scores in double figures in his first game with the Nuggets

Aaron Gordon got the start and finished with 13 points in his Nuggets debut. Gordon was acquired from the Orlando Magic on Thursday along with Gary Clark for Gary Harris and RJ Hampton.

Trae Young had 21 points, 7 assists, and 7 turnovers, Danilo Gallinari scored 14 points, John Collins added 11, and Clint Capela finished with 10 for Atlanta, which lost for just the third time in its last 12 games.

The Hawks were 6-for-9 on three-pointers in the 1st quarter to hold a four-point lead after 12 minutes. They were up 49-45 midway through the 2nd period before Denver made a run to close the half.

Gordon and Jokic each hit two buckets, Porter made another and then fed Gordon for a three-pointer during a 13-0 run, and the Nuggets took a 65-55 lead into intermission.

They kept up the surge at the start of the second half.

The teams traded baskets to start, Porter was fouled on a corner three-pointer and made the free throw, and Murray scored the next 6 points to put Denver ahead by 20.

Young hit two long three-pointers, fed Capela for a dunk, and then scored on a layup during a 10-3 run that got Atlanta within 80-67. The Nuggets responded, going ahead 89-71, and after the Hawks got within 14, Denver closed the 3rd quarter with an 8-4 run to lead by 18 heading into the 4th.

The Nuggets continued to build on the lead at the start of the final period. Green made 3 free throws and hit his third three-pointer of the night to make it 105-80 with 9 minutes left.

The teams put in reserves midway through the 4th and Denver closed it out. – Rappler.com