Thunder clap back with historic rally to stun Lakers 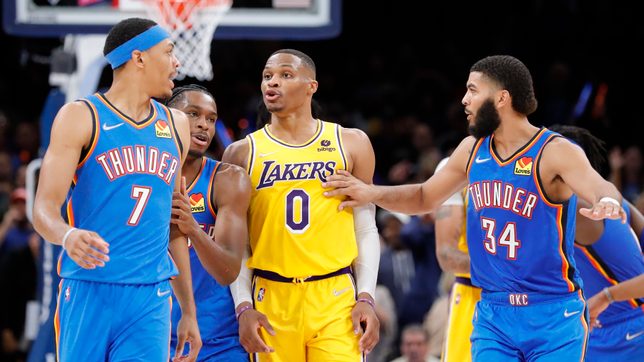 HEATED. Lakers star Russell Westbrook has words with Thunder forward Darius Bazley after scoring a basket during the second half.

The comeback matched the largest in Thunder history and helped the team claim its first win of the season despite several late miscues.

Gilgeous-Alexander fueled the comeback that saw the Thunder outscore the Lakers in the third period, 41-23, capped by a three-pointer at the quarter buzzer for their first lead of the game, 97-95.

The Lakers could have still reclaimed momentum in the final quarter but they squandered their chances late in the game.

Up three in the final minute, Oklahoma City had a timeout remaining but didn’t use it, and Gilgeous-Alexander couldn’t get the ball across halfcourt in time, giving the ball back to Los Angeles with 16.8 seconds remaining.

Lakers’ Malik Monk then missed a three-pointer, the Thunder gave the ball up once again, but Carmelo Anthony missed another.

Russell Westbrook, making his first appearance for the Lakers in the city where he spent his first 11 NBA seasons, was ejected in the closing seconds after being called for his second technical foul of the game.

Westbrook was upset after Darius Bazley’s steal and dunk in the last five seconds.

The Lakers were without LeBron James for the second consecutive game due to right ankle soreness.

Early on, it looked like that wouldn’t matter as Anthony Davis helped Los Angeles jump out to a big lead and then Westbrook put together his first triple-double of the season.

But the Thunder worked the deficit down, taking the lead for the first time when Gilgeous-Alexander banked a three-pointer home at the buzzer to end the third quarter. Oklahoma City never relinquished the lead.

Bazley added 20 points and Josh Giddey tallied 18 points and 10 rebounds as the Thunder had six players score in double figures.

The Lakers led by as many as 26 in the second quarter before the Thunder started slowly chipping away at the lead. Oklahoma City put up a season-high 37 points in the quarter, having more success attacking the basket.

After their rough start in the paint early, the Thunder turned things around down low to finish with 54 points inside. – Rappler.com