Joel Embiid pours in 40 as Sixers pull even with Hawks 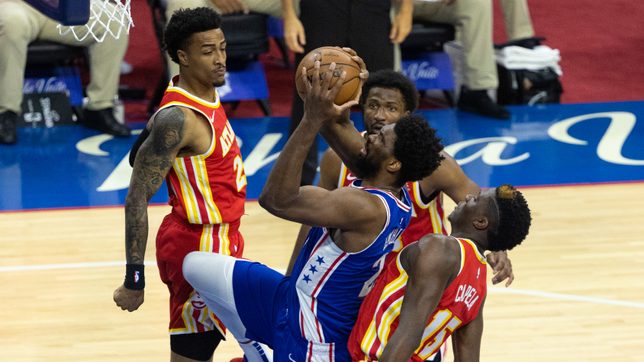 Facebook Twitter Copy URL
Copied
Questionable to play before tipoff, Joel Embiid powers through as the Sixers hold off the rallying Hawks to tie their East semis series

Once again, Embiid was questionable to play shortly before tipoff due to a small lateral meniscus tear in his right knee.

Tobias Harris added 22 points and Seth Curry had 21, including five three-pointers, for the Sixers. Shake Milton scored 14 points in 14 minutes off the bench.

Philadelphia’s reserves were held scoreless in the first half but came through with 26 points in the second half.

Trae Young put up 21 points and 11 assists for the Hawks. Danilo Gallinari had 21 points and 9 rebounds, and Kevin Huerter added a playoff career-high 20. Bogdan Bogdanovic scored 14 points while Clint Capela had 10.

Game 3 in the best-of-seven series will be played Friday in Atlanta.

The Sixers came out strong and moved ahead 23-6. The Hawks stayed patient, chipped away and closed within 37-35 midway through the second quarter.

Embiid soon capped a 9-0 run with a short jumper in the lane and the Sixers led by 11 with 4:52 remaining in the half.

Gallinari dropped in a three-pointer with 2.7 seconds left and the Hawks trailed only 57-55 at halftime.

Harris scored 18 points before the break, and Embiid added 16 points but had three fouls by halftime. Huerter and Gallinari each had 15 first-half points for Atlanta.

The Hawks mounted a rally and cut the deficit to 79-78 with 3:46 left in the third after a difficult three-pointer by Bogdanovic.

Milton made a trey in the last second of the third quarter as the Sixers took a 91-84 advantage.

Milton and Dwight Howard keyed a quick 11-0 spurt to open the fourth and the lead quickly was extended to 18. Milton capped the run with a three-pointer that put the Sixers up 102-84 with 9:45 to go.

Atlanta’s John Collins grabbed an offensive rebound and scored with 8:23 left to get the Hawks within 104-88. Collins finished with a team-high 10 rebounds.