76ers pull away from Pelicans in season opener 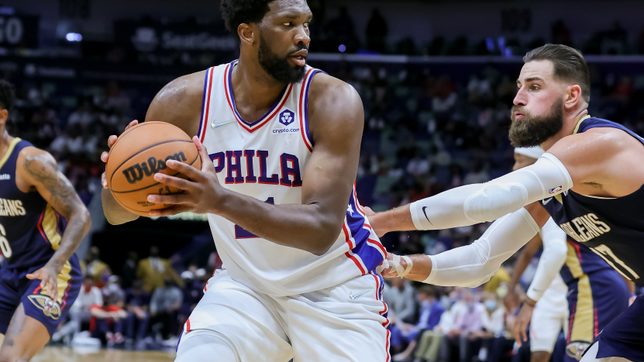 Joel Embiid scored 22 points and Tobias Harris had a double-double as the visiting Philadelphia 76ers pulled away from the New Orleans Pelicans 117-97 in the season opener for a pair of shorthanded teams Wednesday night, October 20 (Thursday, October 21, Manila time).

Harris had 20 points and 12 rebounds and Furkan Korkmaz fired 20 of his 22 points in the fourth quarter as the Sixers outscored the Pelicans, 36-27, in the final period.

Sixers guard Ben Simmons was serving a one-game suspension imposed by coach Doc Rivers on Tuesday for conduct detrimental to the team. Tyrese Maxey started in his place and scored 20, while Georges Niang added 11 and Seth Curry had 10 for Philadelphia.

Embiid scored the Sixers’ first 8 points of the third quarter and Maxey added consecutive baskets as Philadelphia broke from a halftime tie to a 69-62 lead.

Graham’s three-pointer pulled the Pelicans within four points, but the Sixers scored the final 7 points to take an 81-70 lead at the end of the third quarter.

Ingram scored the first 5 points of the fourth quarter, but Korkmaz scored 11 straight Philadelphia points during a 27-7 run that extended the lead to 108-82.

Embiid made a basket on the first possession of the game, setting the tone for a hot-shooting quarter for the 76ers.

He went on to score 12 points and Philadelphia never trailed, shooting 57 percent on its way to a 29-25 lead at the end of the first quarter.

After an exchange of baskets to start the second quarter, Niang made consecutive three-pointers during an 8-0 run that gave the Sixers a 39-27 lead.

New Orleans scored the next 7 points and eventually pulled within 47-46 on a triple by Jonas Valanciunas, who finished with 11 rebounds but made just 3-of-19 shots in scoring 9 points.

Harris beat the buzzer with a basket that tied the score at 53 at halftime. – Rappler.com