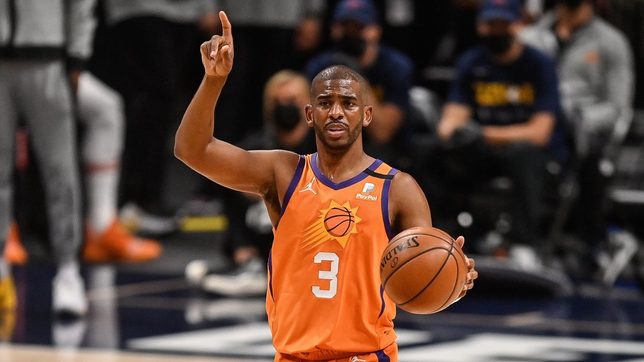 ON A ROLL. Chris Paul and the Suns sustain their hot playoff run.

Deandre Ayton had 10 points and 15 rebounds, Jae Crowder scored 14, and Mikal Bridges added 11 for Phoenix, which will aim for a sweep of the best-of-seven series on Sunday in Denver. Paul contributed 8 assists.

The Suns have won six consecutive playoff games and are one win from advancing to the Western Conference finals for the first time since 2009-2010 – the last season in which they made the playoffs before this year.

Nikola Jokic had 32 points, 20 rebounds, and 10 assists for the Nuggets on the night he received his NBA Most Valuable Player award. Monte Morris scored 21, Michael Porter Jr. had 15, and Will Barton added 14 for Denver.

Phoenix jumped out to a 21-8 lead early and was on top 37-27 after the first quarter. The Suns never trailed after being down 3-2.

Denver closed within 40-36 in the second quarter, but Torrey Craig hit a three-pointer and a layup to start a 9-0 Suns run that got the lead back to 13.

It was a 10-point gap late in the second before the Nuggets scored the final six points of the half to trail just 59-55 at intermission.

Phoenix opened the third quarter on an 11-3 run to go ahead 70-58 on a floater by Booker. Denver tried to cut into the deficit, but two free throws and a pair of pull-up jumpers by Paul kept the lead at 10.

Following a short jumper by Jokic that made it 82-74, Cameron Payne and Cameron Johnson hit two three-pointers to give the Suns an 88-74 lead, and they took a 90-76 edge into the fourth quarter.

Phoenix started the final period by scoring the first six points to lead by 20 with 10:17 left. The Nuggets called a timeout and responded with seven straight points and had several chances to get closer before Crowder hit a three-pointer.

Jokic picked up a technical foul, Paul hit the free throw and then sank two jumpers to make it 104-85. Paul sealed the outcome with a corner three-pointer with 2:43 left to give Phoenix a 17-point edge. – Rappler.com