COASTING. Suns guard Devin Booker drives to the basket against the Thunder tandem of Shai Gilgeous-Alexander (right) and Aaron Wiggins.

Devin Booker recorded 25 points and 12 assists as the visiting Phoenix Suns pulled away from the Oklahoma City Thunder for a 124-104 win to continue both teams’ recent trends on Thursday, February 24 (Friday, February 25, Manila time).

The Suns have won eight consecutive games and 19 of their past 20 while the Thunder have lost two in a row and seven of eight.

Booker scored 11 points in the fourth quarter, including seven in the final four minutes during a 17-4 Suns run that put the game away.

In their first game without Chris Paul, who fractured his right thumb in Phoenix’s final game before the All-Star break, the Suns mostly hummed along on offense, with the exception of a dip in the second quarter.

Over the past seven games, the Suns have averaged 122.1 points. 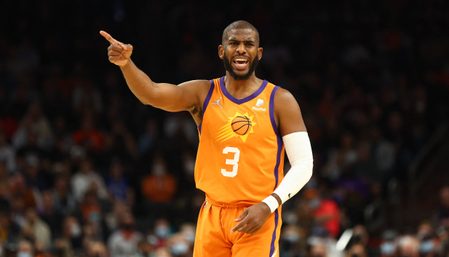 In his first game since January 28, Oklahoma City’s Shai Gilgeous-Alexander scored 32 points on 13-of-22 shooting.

Gilgeous-Alexander had missed 10 games due to a right ankle sprain, but his return wasn’t enough against a balanced Phoenix attack.

Cameron Johnson and Mikal Bridges scored 21 each in the win while Jae Crowder added 17.

The Thunder hit just 6-of-31 (19.4%) from behind the three-point arc, equaling their season low for made three-pointers.

The Suns got off to a quick start and led 31-14 after the first quarter, scoring 14 points off of nine Oklahoma City turnovers. Phoenix ended the period on a 17-2 run and extended the lead to 19 early in the second quarter.

The Thunder shot 1-for-11 with four turnovers at one stretch.

A 12-0 run early in the second helped get Oklahoma City back within striking distance. Pokusevski had 6 points and 4 rebounds during that span.

The Suns’ offensive slide continued late in the second, as the visitors made just 1 of 12 shots during a 17-3 Thunder run to cut the lead to one in the final minute of the first half.

Crowder stripped the ball from Giddey under the basket and laid it up just before the buzzer to give the Suns a 48-45 lead entering the break. – Rappler.com