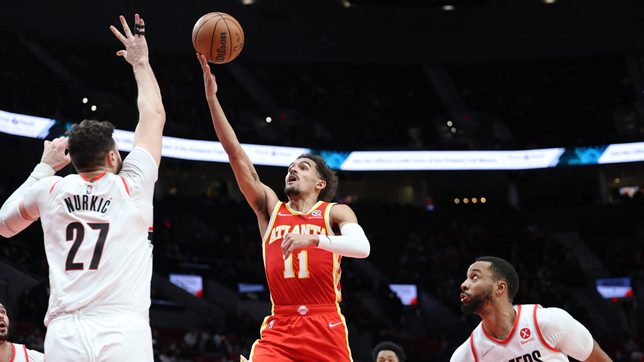 Atlanta star Trae Young scored a career-best 56 points and also had 14 assists but couldn’t prevent the Hawks from losing for the 10th time in 14 games.

Norman Powell scored 26 points and Nassir Little added 22 as Portland snapped a four-game slide and won for just the fourth time in the past 18 games. Jusuf Nurkic had 21 points and 12 rebounds for the Trail Blazers after missing three games due to being in the COVID-19 protocol.

Clint Capela scored 22 points on 10-of-10 shooting and added 11 rebounds for the Hawks. Kevin Huerter scored 18 points and played 37 minutes in his return after missing six games due to COVID-19 protocol.

The Hawks were without John Collins and Bogdan Bogdanovic due to the COVID-19 protocol. Atlanta coach Nate McMillian missed his first game since going into the protocol and assistant Joe Prunty ran the club.

Ben McLemore added 10 points for Portland, which shot 52.8% from the field, including 18-of-41 from three-point range.

A three-point play by Powell made it 123-115 with 3:09 remaining. Young answered with a three-pointer but Nurkic followed with consecutive baskets to increase Portland’s lead to nine points with 1:55 to play.

But Nurkic converted a three-point play with 42.6 seconds remaining and Simons added two free throws with 15.2 ticks left as Portland held on.

Young scored 29 points in the first half but the Hawks trailed 70-65 at the break. Simons scored 26 points in the second half. – Rappler.com