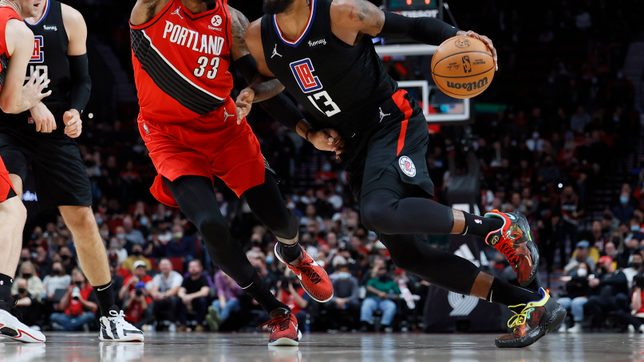 ALL EVEN. Clippers star Paul George dribbles while defended by Blazers power forward Robert Covington during the first half.

CJ McCollum had 14 points as the Trail Blazers won consecutive games for the first time this season.

Paul George had 42 points for the Clippers, who made each of their first six three-point attempts before struggling from beyond the arc the rest of the way.

It was George’s 18th career game of at least 40 points, and three of them have come against the Blazers.

Luke Kennard had 16 points for Los Angeles, whose only victory in five games was against the Blazers on Monday.

The Clippers led by as many as 11 in the first quarter before the Blazers began to assert themselves en route to a 48-40 edge at the break. Los Angeles closed out the half making just three of its final 18 attempts from three-point range.

The Blazers opened their lead to 61-41 as the Clippers started the third quarter 0-of-7 from the field. Los Angeles got within 63-58 on a Kennard three-pointer, but the Blazers pushed the advantage to 76-67 heading into the fourth quarter.

With a chance to cut the deficit to a single possession, the Clippers’ Reggie Jackson missed a three-point attempt with 6:46 remaining. Portland then went on a 17-5 run to take a 99-83 lead as they put the game away.

Norman Powell returned from two games away because of a sore knee to score 12 points for the Blazers. Portland’s Larry Nance Jr. had 10 rebounds off the bench. – Rappler.com