CJ McCollum, Blazers get jump on Suns in rout 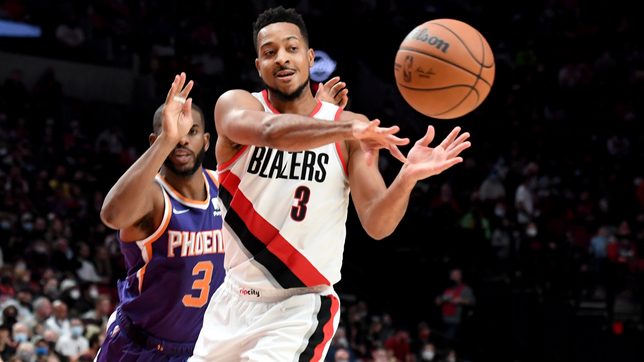 McCollum scored the first five points of a 10-0 run to start the second quarter, with Norman Powell netting the next five, and the Blazers built a lead that stayed in double digits for the rest of the night.

Every Trail Blazers player scored, and five reached double digits. Powell started hot en route to his 16 points, Damian Lillard scored 19 points to go with 8 assists, and Anfernee Simons came off the bench to knock down four three-pointers and finished with 18 points.

Portland’s team field-goal percentage hovered near 60% for most of the night and settled at 51-of-94 (54.3%). All five Blazers starters made at least 50% from the floor, led by Powell’s 75%, and four of the five hit at least two three-pointers.

Larry Nance Jr. made all three of his shot attempts off the bench, including a pair from beyond the arc, en route to 8 points. Nassir Little added 11 points and 7 rebounds in reserve.

Jusuf Nurkic paced the Blazers to a 55-45 advantage on the glass with a game-high 12 rebounds. Nurkic also posted a game-best plus-30 plus-minus rating.

No Phoenix player who saw more than 10 minutes finished on the positive side.

One night removed from a win over the Los Angeles Lakers in which it controlled throughout, Phoenix was sluggish in Portland.

Three Suns scored at least 21 points on Friday, but only Devin Booker reached that mark on Saturday. He went 9-of-19 from the floor for 21 points.