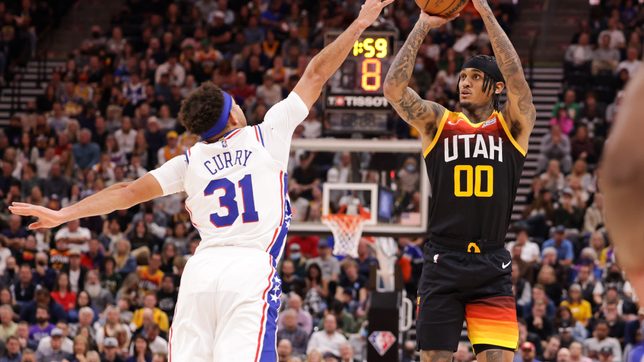 CONTRIBUTOR. Jordan Clarkson ends up as one of the six Jazz players to score in double figures against the 76ers.

Bojan Bogdanovic scored 27 points, Rudy Gobert logged his 11th double-double of the young season and the Utah Jazz snapped out of a mini-funk by dominating the Philadelphia 76ers in a 120-85 home victory on Tuesday, November 16 (Wednesday, November 17, Manila time).

Gobert took advantage of the Sixers being without Joel Embiid, who has missed five consecutive games – all losses – because of COVID-19 protocols.

The Jazz center scored 15 points, grabbed 17 rebounds, and blocked 4 shots while helping Utah win for just the second time in six games. He spearheaded a Jazz defense that limited Philadelphia to 36.7% shooting.

Bogdanovic hit 9-of-12 shots overall and 5-of-7 from three-point range to lead a Utah offense that made 51.7% of its field goal attempts and earned its largest margin of victory this season.

Shake Milton scored 18 points and Tyrese Maxey added 16 points for the Sixers, who have lost five in a row after reeling off a six-game winning streak. This was the second stop on a five-game road trip for Philadelphia.

Utah, which lost the first two games on its four-game homestand, led by only two points after the first quarter. That changed quickly, though, as the Jazz opened the second quarter on a 14-point scoring streak thanks, in part, to 6 points from Clarkson.

Furkan Korkmaz finally put the Sixers on the scoreboard at the 7:56 mark of the quarter. Minutes later, however, Clarkson and Bogdanovic hit three-pointers during an 8-0 run, putting the Jazz up 52-32.

The third quarter was much of the same, with the Jazz scoring the first 5 points and starting the second half on a 15-4 spurt. Utah’s 16-point halftime lead blossomed to 31, 97-66, after three quarters. – Rappler.com