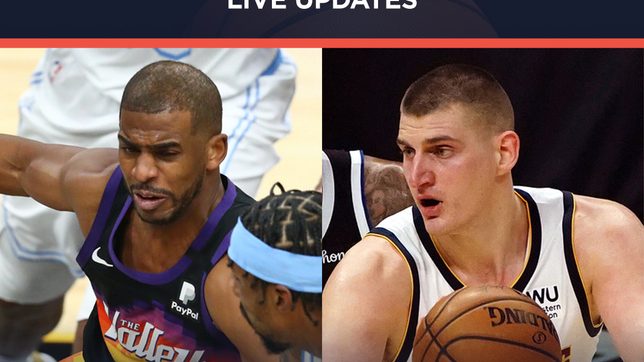 Facebook Twitter Copy URL
Copied
Given what Chris Paul and the Suns showed in Game 1, Nikola Jokic may have to go above and beyond his usual MVP numbers to keep the Nuggets afloat

The 41st pick of the 2014 draft formally received the honor with a surprise message from league commissioner Adam Silver during a team meeting, and the Serbian star humbly thanked his teammates and coaches in a short speech.

However, the fun was likely short-lived that night as the Nuggets still have to bounce back from a 122-105 Game 1 semifinals beating against the red-hot Phoenix Suns.

Four out of five Suns starters scored at least 20 points, none more important than Chris Paul’s 21 markers and 11 assists as he leaves his shoulder injury in the rearview mirror. Two-way wing Mikal Bridges, meanwhile, topscored with 23 points.

This is the kind of offensive diversity that the Nuggets simply had no answer to in Game 1, as they are still missing their starting backcourt of Jamal Murray and Will Barton.

While stand-in guards Facundo Campazzo, Austin Rivers, and Monte Morris are clearly giving full playoff-level effort, their talent levels simply aren’t enough to make do with what Denver lost, and relieve the damage Phoenix is dealing.

Given what the Suns showed in Game 1, this only means that Jokic will have to go above and beyond his usual MVP numbers moving forward just to keep the Nuggets’ heads above water, and possibly squeeze out some wins.

Upstart forward Michael Porter Jr. and former Orlando Magic star Aaron Gordon will also have to carry heavier loads on both ends of the court just to ease the gargantuan pressure Jokic is bearing on a nightly basis.

As Luka Doncic once again showed in Dallas’ second straight first-round series loss, one man can only take a team so far.

Will the banged-up Nuggets adjust in time to steal Game 2, or will the Suns “rally the valley” once more to earn a commanding 2-0 series lead?