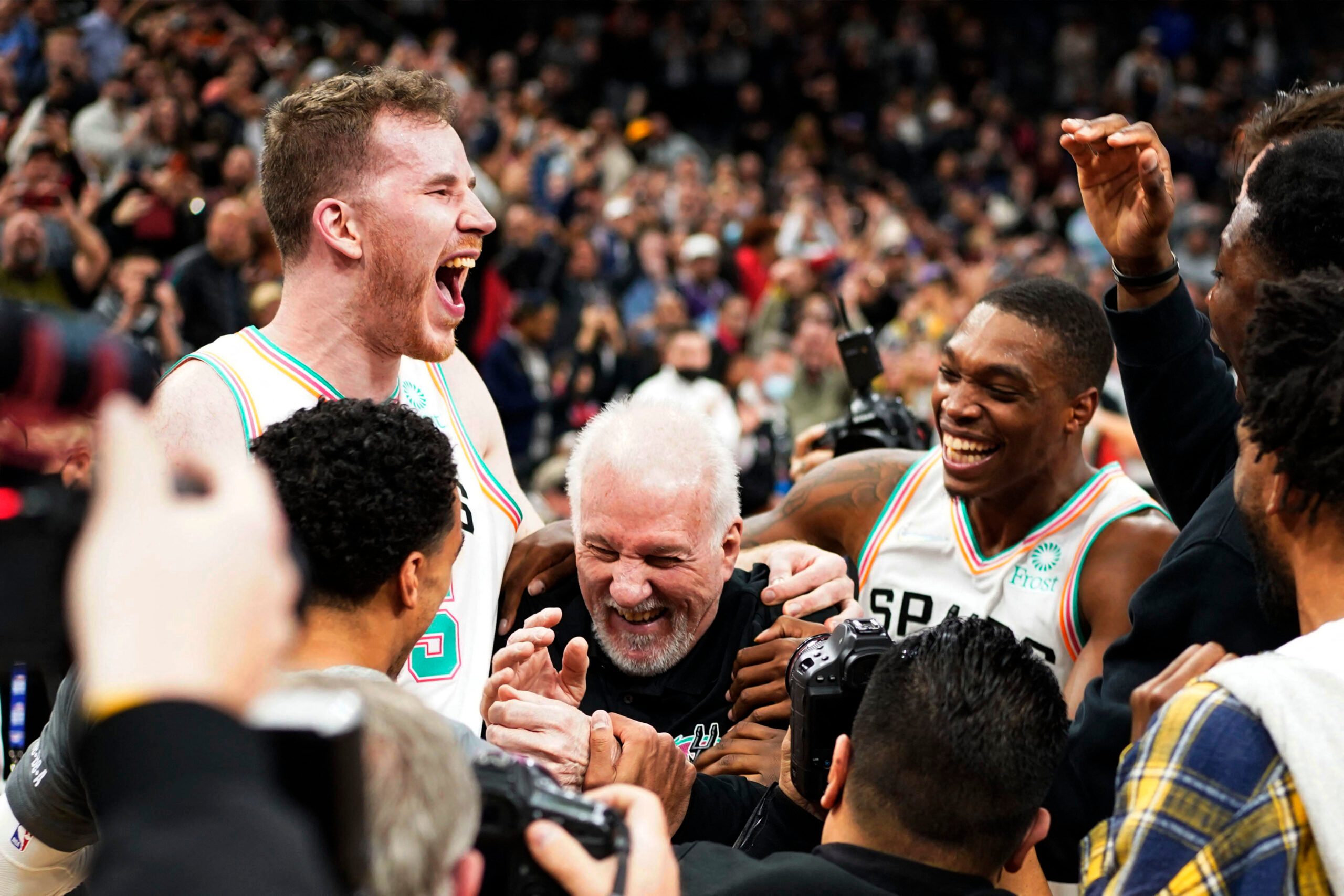 Facebook Twitter Copy URL
Copied
In his 26th NBA season with the Spurs, Gregg Popovich claims his 1,336th victory as he surpasses Don Nelson in the all-time coaching wins list

San Antonio coach Gregg Popovich is not one to call attention to himself, but his players made sure he basked in the limelight for at least a few minutes after he became the NBA’s all-time leader in regular-season coaching wins Friday, March 11 (Saturday, March 12, Manila time).

The Spurs players kept Popovich on the court to soak in the applause from the home fans after his team rallied for a 104-102 win over the Utah Jazz. He looked uncomfortable amid the attention, but finally cracked a smile.

His grin was about more than just the record, as the Spurs rallied from 15 points down in the fourth quarter to give Popovich the win. San Antonio had been 0-33 in games it was trailing entering the final period.

The victory, Popovich’s 1,336th, pushed him past Don Nelson. Popovich is his 26th NBA season, all with the Spurs. He tied Nelson on March 7 via a victory over the Los Angeles Lakers, but San Antonio lost its last game.

“It’s obvious what happened, but it’s just a testament to a whole lot of people,” Popovich said. “Something like this does not belong to one individual – you know basketball is a team sport, and you know you appreciate your players that they have to do it together. And that’s certainly been the case in my life with all the wonderful players and coaches and staff. I have been blessed with the support of this wonderful city.”

“Gregg Popovich’s success with the Spurs is unprecedented in our league. … His leadership and unwavering commitment to the game are widely admired by generations of players and coaches alike,” Silver said Friday.

The Spurs trailed by 10 entering the fourth quarter and by 15 early in the period but rallied to take the lead and were up 98-95 after Jakob Poeltl made a floater with 31.3 seconds remaining. Utah’s Donovan Mitchell canned a jumper with 17.6 seconds left to cut the lead to a point.

Josh Richardson then converted a free throw with 14.2 seconds to play but missed the second. The Spurs’ Keldon Johnson swooped in for the offensive rebound, was fouled, and made both free throws with 12.5 seconds remaining to make it a four-point game.

Mitchell’s bucket with 5.9 seconds to play cut the lead back to 2 points before Dejounte Murray made a pair of free throws with 4.8 seconds left. Rudy Gay hit a three-pointer with two seconds left, but Murray added another free throw, and the Jazz could not get off another shot.

“It’s just one win tonight,” Popovich added. “The record is there, but the win feels better actually than the record tonight, because Utah has a hell of a team. To win a game against a team like that is why we do this. Not for the record. We do it to have these kinds of wins. So, I’m thrilled about the win and really proud of the guys for the way they competed.”

Mitchell scored 24 points to lead the Jazz. Jordan Clarkson had 17 points, Rudy Gobert had 13 points and 16 rebounds, and Hassan Whiteside finished with 13 points and 10 rebounds for Utah.

Utah coach Quin Snyder spoke before the game about Popovich’s impact on people in and out of basketball:

“The way that he has touched so many people’s lives in so many different ways … they don’t keep track of wins for those,” Snyder said. “But I guess he broke that record a long time ago.”

Mitchell scored 10 points in a stretch of the second period when the Jazz turned a two-point deficit into a 57-45 lead with 2:22 to play in the half.

Utah took a 59-50 advantage into the break behind Mitchell’s 18 points in the first half. The Jazz hit 9 of 22 shots from beyond the arc in the half, with Mitchell making 4 of them.

Collins paced the Spurs with 13 points in the half, with Murray adding 12 as San Antonio shot only 39.5%. – Rappler.com