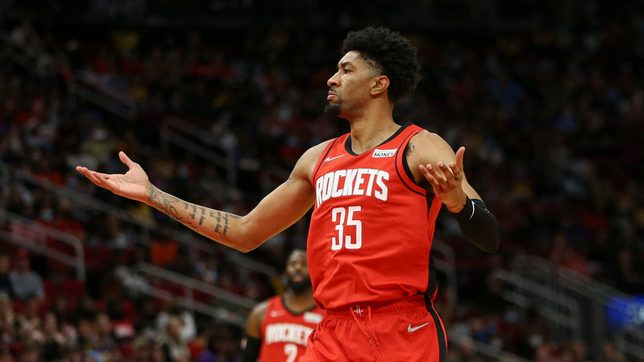 The Houston Rockets suspended guard Kevin Porter Jr. and center/forward Christian Wood in the game against the Philadelphia 76ers for their behavior during a weekend loss to Denver.

Per multiple reports, Porter had a heated exchange with assistant coach John Lucas at halftime of Saturday’s 124-111 loss to the Nuggets. The Athletic reported Lucas called out the “entire team at halftime,” with Porter taking issue and reportedly throwing an object before he “promptly left the arena.”

The Rockets lost to the Sixers, 133-113, on Monday, January 3 (Tuesday, January 4, Manila time) as Philly star Joel Embiid had 31 points, 15 rebounds, and 10 assists. It was the third career triple-double for Embiid.

“We had a spirited debate,” Rockets head coach Stephen Silas said of the incident. “I have certain demands of this team as far as playing hard. … I wasn’t satisfied with the effort.”

Wood, who averages team-best totals in points (16.8) and rebounds (10.3) reportedly refused to sub into the game for the second half against the Nuggets.

Wood came off the bench Saturday after missing a mandatory COVID-19 testing window, according to The Athletic. Wood’s “effort level” was a focus of Lucas’ fiery halftime speech, per the report.

Porter is averaging 12.8 points and 5.7 assists for the Rockets.

Furkan Korkmaz added 24 points and a career-high 11 rebounds for the 76ers, who won their fourth in a row.

The 76ers played without Tyrese Maxey, Matisse Thybulle and head coach Doc Rivers as they were held out in the league’s health and safety protocol. For the second straight game, assistant Dan Burke served as the acting head coach.

Garrison Mathews led the Rockets with 23 points, while Eric Gordon and Jae’Sean Tate each scored 14, and Josh Christopher had 13. Jalen Green and David Nwaba chipped in with 12 apiece and Kenyon Martin Jr. had 11.

The game was tight throughout the first half and the Rockets went ahead 61-60 when Mathews dropped in a three-pointer from the corner with 1:02 left.

Houston led 63-62 at halftime thanks in large part to nine offensive rebounds and Mathews’ 17 points.

Embiid kept the 76ers close with 19 points and 10 rebounds despite spending part of the second quarter in the locker room for an unspecified reason.

The 76ers pulled out to an 87-75 advantage with 5:34 remaining in the third after Georges Niang hit a 3-pointer.

Harris and Andre Drummond scored consecutive baskets to open the fourth as the 76ers extended their advantage to 15.

The 76ers responded and regained a 122-103 lead after Embiid drove to the basket and scored with 4:01 to go. It was more than enough of a cushion for the 76ers to cruise to the win. – Rappler.com