How the Clippers eclipsed the Mavericks in Game 7 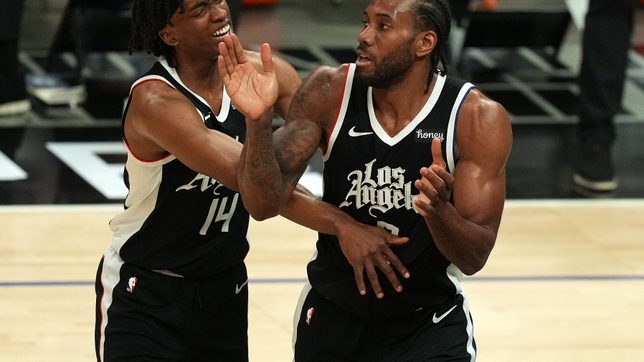 THE KLAW. Clippers star Kawhi Leonard continues his individual mastery over the Mavericks.

Facebook Twitter Copy URL
Copied
After dropping the first two games, the Clippers complete their comeback against the Mavericks with a gritty Game 7 win to reach the Western Conference semifinals

There’s a part of everyone – this author included – that didn’t want the series between the Los Angeles Clippers and the Dallas Mavericks to end.

It’s a matchup that was filled with everything a basketball fan could’ve hoped for: drama, intensity, star power, and individual back-and-forth slugfests between each team’s marquee names.

For the more tactically inclined fans, it involved a battle of adjustments, bannered by two championship coaches who possess tons of playoff experience and have succeeded when the stakes were at an all-time high.

After six games of everything but the kitchen sink being thrown at each other, it seemed like there were no more surprises left to be had. Game 7s are often battles of attrition, more so than they are contests of who can whip out something new to gain an edge.

But as the final first round game of these playoffs began, there were a couple of wrinkles each team tried out against each other.

The question of solving the aggressive coverage schemes against Luka Doncic was one that the Mavs had to answer. The Clippers threw a bunch of looks off the pick-and-roll throughout the series, including straight-up “soft” switches that put the likes of Patrick Beverley and Ivica Zubac onto Doncic. Needless to say, those matchups did not favor the Clippers.

After going to a small starting lineup as the series progressed, the Clippers explored other options. Trapping Doncic off a screen seemed to be the obvious answer, but there is a delicate balance between the benefits it may give and the risks it can present.

The benefits: trapping Doncic forces him to give up possession of the ball, and it speeds up his decision-making. He is more than capable of making quick decisions and finding the holes created by putting an additional defender onto him.

But it ups the risk of him making a mistake. A capable backline defense can shore up in the face of a numbers disadvantage. Timely rotations and recoveries can be made, which can force turnovers or rushed shots.

The Mavs needed to have a release valve of sorts, someone who can act as a hub in the short roll and make decisions against a numbers advantage. Boban Marjanovic was that decision-maker in Game 6 – while he is a capable passer, he typically doesn’t process situations quickly enough to punish an outnumbered backline.

When the Clippers doubled Doncic on the possessions below, Marjanovic was there to relieve pressure. He attracts gravity due to the threat of his dives to the rim and through the simple fact that he’s a 7-foot-4 presence who was a mismatch against the small Clippers lineup.

Marjanovic made the quick kick-out pass to Dorian Finney-Smith for the three, and punished the Clippers backline by finding Kristaps Porziņgis on a couple of baseline cuts.

The Clippers mixed up their coverages against Doncic, opting not to count on the trap exclusively. They tried to hedge him off of ball screens, something akin to a trap that forces Doncic out of his comfort zone in the pocket, but allows recovery of the hedging defender toward his original assignment.

Hedging was also an attempt to prevent switches onto matchups that Doncic tried to dictate. But it also made the Clippers more vulnerable to “ghost” or fake screens. For example:

Finney-Smith “ghosted” the screen and popped out toward the right wing, which put the hedging Reggie Jackson at a severe disadvantage in terms of the distance he had to recover back to his man. Jackson recovered too late, and Finney-Smith drilled the open look.

The Clippers’ adjustments vs the Mavs’ zone

After the Clippers – Kawhi Leonard and Paul George in particular – increased their rim pressure to even the series at 2-2, the Mavs countered by starting Porziņgis and Marjanovic together in a twin-tower setup. In order to avoid unnecessary mismatches and to maximize the length of such a pairing, the Mavs then proceeded to throw a classic 2-3 zone toward the Clippers.

Suffice to say, the Clippers were befuddled by such a tactical adjustment.

In Game 5, the Clippers became hesitant to drive inside and put pressure on the rim. They resorted to stagnant offensive possessions that mostly consisted of late-clock jumpers and isolations. Even if the Clippers were the best 3-point shooting team during the regular season, the Mavs were content with variance being on their side.

The Clippers did a much better job of exploiting the small margins within the zone in Game 6. Roaming the baseline, occupying the dunker spot, flashing toward the middle, and timely shooting stretched the zone thin, until the Mavs were forced away from it. In Game 7, the Mavs stuck to their guns and the Clippers continued to find those small chinks in the armor.

Ball movement is paramount to breaking a zone, especially when forcing rotation from its weak points. A zone intends to hide weak defenders, preventing them from being isolated on an island against mismatches.

But it can’t hide them completely – not when furious swing-swing possessions force them to defend in rotation, such as in the clips below. The Clippers victimized Porziņgis twice on corner threes, taking advantage of his lack of mobility and insufficient closeouts:

The Clippers also mixed in dribble penetration to collapse the zone inward, opening the perimeter for kick-out opportunities. Unlike in previous games, variance was in their favor – the non-George-and-Leonard contingent buried their shots and ultimately shattered the Mavs’ zone.

Leonard continued his individual mastery over the Mavs and especially thrived within the margins that a zone gives up. His mid-range proficiency was magnified when flashing to the middle:

Leonard’s ability to beat his man off the dribble and increase his aggression to the rim – the kind of north-south injection the Clippers needed to put a lot of pressure in the paint – was crucial. The Mavs largely had no answer for them.

The Clippers’ defensive adjustments on Doncic

He put up 17 of his 46 points in the second half, but was slightly less efficient, shooting 7-of-16 from the field and drilling only a single three.

With dogged perseverance and tenacity, Leonard made it a point to stay on Doncic in order to prevent being switched off of him. He fought over screens, recovered in timely fashion toward Doncic on hedges, and used his own physical brand of defense to tire Doncic out and increase the degree of difficulty of his attempts.

In this seven-game war of attrition, it was Leonard who outlasted Doncic.

Doncic was also baited into mistakes, partly due to timely rotations and interceptions on high-low passes to Marjanovic underneath, and partly due to the pressure being put by the Clippers on him courtesy of traps and blitzes, speeding up his game and forcing him to make quick decisions.

While he was capable of punishing traps, as was shown earlier, the chances of him faltering out of a well-timed, well-executed trap were significantly increased.

Ultimately, it was Doncic fighting an uphill battle with insufficient support from his teammates, despite 77 points being created on his scores or assists – the record for most points created by a player in a Game 7. Save for Doncic and Finney-Smith, who put up a combined 9-of-18 clip on threes, the rest of the Mavs shot an abysmal 1-of-18 from deep.

Meanwhile, the Clippers had 20 makes from beyond the arc on 43 attempts – putting up an astronomical percentage of 46.5%, which included an 8-of-20 clip from the corners and a 12-of-23 clip on above-the-break threes.

Those two factors, plus the Clippers making the necessary adjustments needed for them to gain a much-needed edge over Doncic and his crew, are why the Clippers are headed toward an anticipated three-point shootout against the Utah Jazz.

Meanwhile, Doncic has proven himself good enough to win a series. The question remaining, however, is if the pieces surrounding him aren’t. – Rappler.com