How the Grizzlies overplayed their hand against Steph Curry 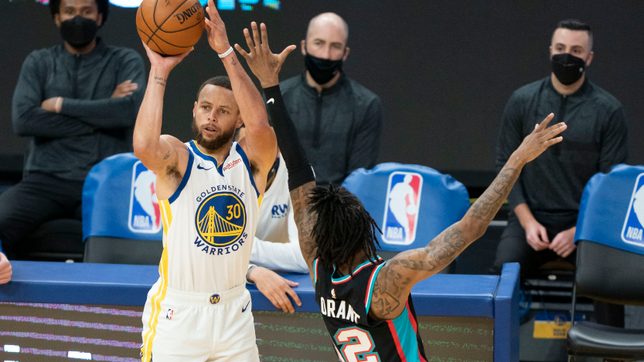 SCORING CHAMPION. Steph Curry helps the Warriors nail the No. 8 seed in the Western Conference play-in tournament with a win over the Grizzlies.

There are typically two universally accepted methods teams employ whenever guarding Stephen Curry, whose shooting and overall offensive skill set have the ability to wreck defenses with a proverbial snap of a finger (or a literal flick of the wrist). Curry is a difficult assignment in single coverage – the logical thought progression would be to simply not defend him one-on-one.

If the Golden State Warriors try to run Curry off ball screens, you double and blitz him away from the three-point line. You either force a turnover or you force him to give up possession of the ball. Curry without the ball in his hands isn’t that much better for defenses – he’s one of the best off-ball players of all time, if not the definitive best – but at least you live to fight another possession.

If a team does decide to guard Curry in single coverage, players who are given such an unenviable task are of a certain profile: highly physical, lengthy, and intelligent. They are aware that Curry is at his best when he’s in a zone, with a rhythm that becomes nigh unbreakable when a player of his caliber is able to establish it.

The Memphis Grizzlies deployed a mix of both coverages against Curry. They sent doubles and blitzes his way:

Curry had 7 turnovers against the Grizzlies and 2 of them were from double teams such as the ones above.

But the Grizzlies did not lean heavily on the double team to defend Curry, perhaps intent on not unleashing Draymond Green on one of his patented short-roll, 4-on-3 decision-making comfort zones. They had a defender in Dillon Brooks: relatively bigger and lengthier, but with just enough foot speed, guile, and physicality to constantly pester and nudge Curry, whose wiry frame and small stature made him very easy to push and shove around.

Defenders in the past have walked the thin line separating clean defensive physicality from obstructive fouling. Brooks had no qualms about walking that line:

By holding and sticking to Curry, Brooks was able to deny him the usage of down screens. “Top-locking” or overplaying Curry kept Brooks in control of where he wanted Curry to go. Being overly handsy helped – the officials mostly let Brooks do his thing, which only empowered him to ramp up his intensity on ball denials.

The plan worked – initially. Curry shot 1-of-5 on threes in the first quarter, but still managed to put up 9 points. Perhaps sensing that the Grizzlies were willing to do everything to run him off the line, Curry adjusted by scoring in the paint.

What has separated Curry from other great shooters in the history of the NBA has been his off-the-dribble game. The threat of him pulling up for a three keeps defenders guessing. It’s a common sight for defenders to commit all sorts of errors; it’s often a matter of which side defenders would rather err on.

Curry is shooting 65% at the rim, 85th percentile among point guards, per Cleaning the Glass. An oft forgotten fact is that Curry is a master finisher, not because of his athleticism and verticality, but because his handles and various finishing angles allow him to get the ball past the tall trees and pogo sticks.

On those occasions where Curry finds it difficult to get ahold of the ball, he makes himself useful in other ways. Much has been made of his legendary “gravity” – the ability to use his magnetic pull to open up all sorts of looks for his teammates. Part of that gravity is his willingness to set screens.

Among guards, Curry is second behind Ben Simmons in total screen assists (77). His 1.2 screen assists per game is third among 102 guards who average at least 25 minutes per game, per NBA.com.

Peep at Curry setting an inverted screen on Jonas Valančiūnas, allowing Green to get downhill for the dunk. Whereas typical ball screens are set by a big man for a guard, Curry flips the table on conventionality. Brooks isn’t willing to detach himself from Curry and isn’t willing to commit to a switch onto Green. Such is an example of Curry using his unique effect on defenses for the greater good.

The absolute hesitation to detach from Curry, just to prevent him from getting the ball and pulling up, commands unique defensive game plans. Opponents’ base schemes are often set aside – a team who often prefers to drop their bigs on pick-and-rolls must play at the level of the screen, lest they give up a wide-open look.

Switching is also an option if opponents have the personnel to pass Curry onto someone who can keep up. Guard-guard or guard-wing switches are ideal; guard-big switches aren’t preferred, but there are those big men, however few, who can keep up with Curry and at least make him work for his points.

The Grizzlies preferred to have Jaren Jackson Jr. be that big man:

Jackson does an excellent job of cutting off Curry’s potential driving angles, and manages to get a clean swipe on the ball.

Any big other than Jackson, however, had trouble:

In an attempt to avoid situations such as the one above, the Grizzlies doubled down on their top-locking. Brooks’ level of physicality turned up a notch, with Curry having to go above and beyond to get a bit of airspace for an open look. But despite Curry’s 22 attempts from beyond the arc – a career-high in three-point attempts in a single game – he found creative ways to leave Brooks in the dust.

For every Brooks overplay on down screens or staggered screens, Curry would cut backdoor, with every scoring possession courtesy of a well-timed dish by Green.

On possessions where he scores on a cut, Curry puts up 1.571 points per possession, which is in the 93rd percentile, per Synergy. However, only 4.1% of his possessions consist of cuts, given that cuts are more opportunistic and dependent on the looks defenses give. Curry has made the most out of every opportunity to go the backdoor route and punish top-locking defenders.

Curry’s cuts allowed him to get into a consistent scoring rhythm. In turn, it eventually opened up his outside shooting. The Grizzlies’ scheme couldn’t fully stop Curry’s bread-and-butter long-range sniping – rather, it only delayed the inevitable.

The Warriors were able to unleash the greatest shooter of all time on their patented split action:

On pitch actions and give-and-gos:

And, of course, on audacious pull-up threes off the dribble and in transition, the kind of perpetual green light Curry not only possesses, but also invented:

Curry’s 46 points against the Grizzlies came on 36 total attempts from the field, a career-high for field goal attempts in a single game. Curry threw caution to the wind, and considering the stakes at hand – two chances to enter the playoffs proper while only needing to win once – it was fully justified.

“It felt like [during] the second and third quarters, mostly third, I got a lot of good looks,” Curry said after the game. “Coming off [dribble handoffs], coming off back cuts, getting in the paint, they kind of came in waves. That was an interesting kind of dynamic because I do kind of understand where I’m at when it comes to being aggressive, especially with how many possessions we had.”

“In the fourth quarter, it was go time. So at that point, you don’t think about it. You just let it fly and don’t second-guess any shots in a game like this when we need the win.”

Curry completes the season having achieved more than what some people expected – “some people” referring to those who wrote him off as “overrated,” a “has-been,” and “past his prime.” He responded by finishing the year with a stat line worthy of the MVP under better team circumstances: 32 points, 5.5 rebounds, and 5.8 assists, on a shooting split of 48/42/92 and 65.5% true shooting – an efficient shooting and scoring performance that garnered him the second scoring title of his career.

The victory against the Grizzlies has earned Curry and the Warriors a dance with the Los Angeles Lakers in the 7-vs-8 play-in game, the fifth meeting between Curry and LeBron James in the postseason.

The Warriors are the underdogs, as they should be. They would be facing a team that not only has two dominant superstars – they would also be facing the stingiest defense in the league, the kind that is capable of cutting off Curry from the rest of his teammates and not overplaying their hand, as what happened to the Grizzlies.

But as long as Stephen Curry is on the floor – at age 33, arguably the most dangerous he’s ever been – there will always be a chance. – Rappler.com