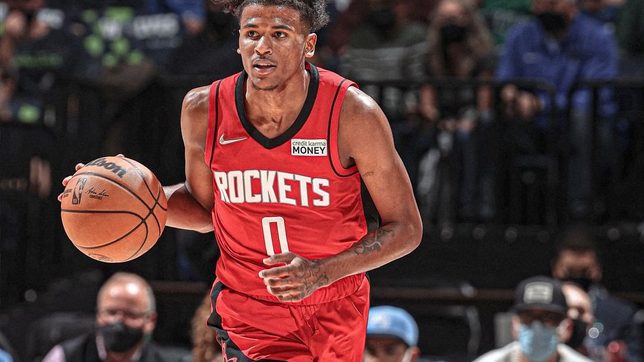 Facebook Twitter Copy URL
Copied
‘It’s all new – the speed of the game, the pace, the physicality, but I can’t let that be an excuse,’ says Fil-Am rookie Jalen Green after scoring just 9 points in his NBA debut for the Houston Rockets

Jalen Green’s rookie season started off on the wrong foot as the Houston Rockets suffered an 18-point loss to the Minnesota Timberwolves, 124-106, in their season opener on Wednesday, October 20 (Thursday, October 21, Manila time).

Green, the second overall pick in the 2021 NBA Draft, struggled to make his presence felt in his first regular season game for the Rockets as he finished with only 9 points on 4-of-14 shooting, 4 rebounds, 4 assists, and a plus-minus of -37 in 32 minutes of action.

For Green, who also had a rough preseason showing for the Rockets earlier this month, the NBA style of play is “all new” to him, but he made it clear that it’s not an excuse for his early struggles on the hardwood.

“It’s all new – the speed of the game, the pace, the physicality, but I can’t let that be an excuse,” Green told reporters after the game.

The 19-year-old sensation also admitted that opposing players have been playing physical against him, but he understands that the NBA is a league for grown men and he is no longer playing in high school, where he used to dominate opponents with his dazzling high-flying style of play.

“Every game so far, I feel like everyone’s been trying to bump me because I’m a rookie and I’m young and that’s alright,” said Green.

Green and the rest of the Rockets will look to bounce back from their season-opening loss when they host the Oklahoma City Thunder on Saturday, October 23, Manila time. – Rappler.com