Facebook Twitter Copy URL
Copied
Down 0-2 against the Mavericks, the Clippers tie their Western Conference first-round series thanks in large part to star duo Kawhi Leonard and Paul George

The Dallas Mavericks weren’t an excellent defensive team during the regular season. They were by no means a terrible one, but not the kind that certainly was the blueprint for a deep-playoff team, let alone a championship-caliber one.

Their defensive schemes weren’t all too complicated. Switching is typically limited to like-sized actions: guard-guard, guard-wing, or wing-wing exchanges are acceptable. When their bigs are involved in screening actions, however, the Mavs are reluctant to switch those actions unless they have no other choice.

Hence, they opt to play their bigs in various levels of drop: deep, if they trust the on-ball defender enough to stay attached to their assignment, or the threat level of pulling up from the ball-handler is low; at the level of the screen, if the ball-handler is a pull-up threat; or the occasional trap against an opposing star who warrants it, though they rarely do so – only 0.6% of their defensive possessions are traps off the pick-and-roll, per Synergy.

Despite the size of their bigs, the Mavs were far from being an elite rim-protecting unit – opponents shot 65% at the rim against the Mavs in the regular season, 20th overall, per Cleaning the Glass.

That would be the lowest-hanging fruit the Los Angeles Clippers could have grabbed going into their first-round series, but true to their regular season tendencies, the Clippers didn’t exactly exploit such a weakness right off the bat.

The Clippers did not put a lot of rim pressure on opponents during the regular season – 29.4% of their shot attempts were at the rim, 26th overall, per Cleaning the Glass. The dearth of aggression was mostly an extension of the lack of rim attacks from both of their stars, Kawhi Leonard and Paul George.

Leonard and George are both capable drivers and paint operators – Leonard with his strength and mid-range proficiency, George with his slithery moves and elite finishing ability at the rim – but during the regular season, only 25% of Leonard’s shots (31st percentile among wings) and 27% of George’s shots (37th percentile) were at the rim.

Even if the Clippers were the top three-point shooting team in the league during the regular season (41.6%), it shouldn’t be license for them to be fully dependent on it. Shooting has its ups and downs, and there were bound to be downs during the playoffs. It showed during their two losses against the Mavs, where they shot a combined 24-of-73 (32.9%) on threes, but were reticent about attacking the rim – in Game 1, only 27% of their shots were at the rim, per Cleaning the Glass.

Cherry-picking the lowest-hanging fruit from the Mavs was paramount if the Clippers were to have a shot at winning the series. It was something the Clippers were aware of, and it was a problem they addressed and glaringly fixed as the series shifted to Dallas.

Attacking Porzingis aggressively in the paint was a good start. 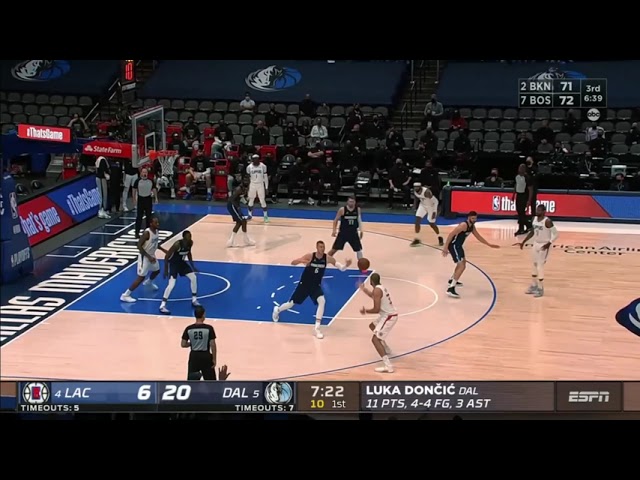 The Clippers run action to get George switched onto a Mavs big – first, on Maxi Kleber, then eventually onto Porzingis. George knows the matchup favors him, so he goes straight at Porzingis, beating him off the dribble and throwing in a bit of body contact to create space. Porzingis is in no position to block the shot.

Porzingis is a sore thumb sticking out defensively. Whenever he’s on the floor, the Clippers make it a point to target him on screening actions and forcing switches, even if the Mavs try not to switch with him as much as possible.

Porzingis; overall lack of mobility is a huge handicap on his ability to keep up with faster and nimbler guards and wings. Putting him on hedge-and-recover schemes to prevent switches is another avenue for George to step on the gas pedal and blaze his way to the rim.

Before Porzingis can fully get into his hedge, George accelerates and splits the hedge. The Mavs’ lack of backline rim protection can’t stop George’s downhill momentum. 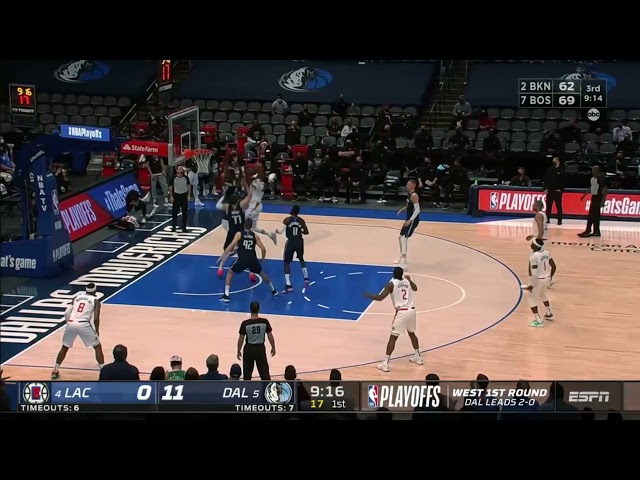 The Mavs don’t have a lot of answers whenever George decides to ramp up the aggression inside, especially since George can be highly effective in that area when he wants to be. So far during the playoffs, he has been elite at shots around the basket, putting up 1.72 points per possession (PPP) – 97th percentile, per Synergy.

It’s not self-serving aggression, either. Forcing the Mavs to pay attention to forays in the paint opens up looks for others on the perimeter. It’s basic drive-and-kick basketball – you make yourself enough of a threat on drives, you force help from somewhere, and an opening is created.

Even a sliver of help is enough to unlock shots and penetration from the weak side. On the possession below, the Clippers run a set to get George downhill. George initially sets a back-screen for Leonard, then runs off double staggered screens set at the nail that gets him an open driving lane. Luka Doncic sags off Patrick Beverley on the weak side, creating an opening for George to kick it out to Beverley. Doncic’s close-out is hard, enough for Beverley to blow past him for the penetration. 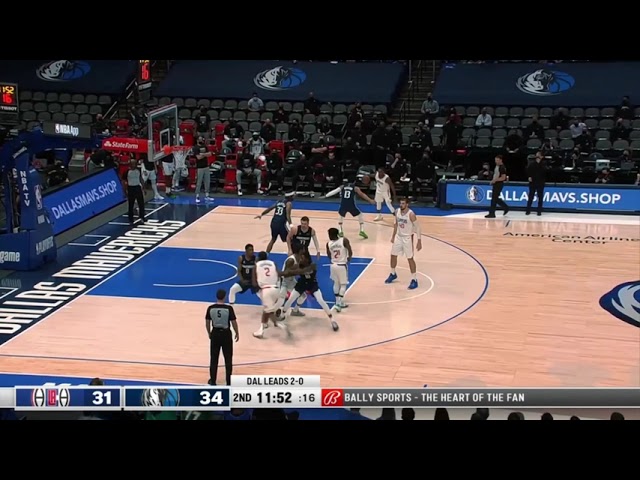 Assists generated from rim pressure – or the threat of it – are even more pronounced in transition against a Mavs defense that isn’t set, and where the Mavs’ tallest defenders, due to cross-matching in transition, aren’t even in a position to contest paint shots.

George takes full advantage of cross-matching here – he starts his drive inside to draw help, then dumps it off to Leonard, whose position at the dunker spot enables him to feast on overhelping defenders. 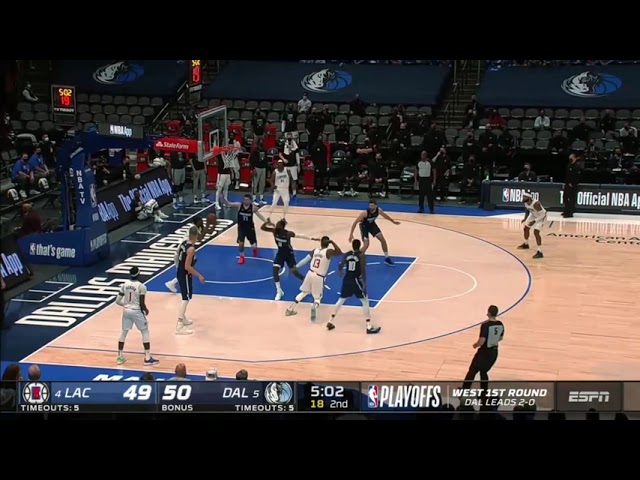 On post-ups against smaller and weaker defenders, Leonard has made good use of his drop step to leave them behind in the dust. Against bigger and taller defenders – especially against this non-rim-protecting crew that the Mavs have – Leonard has used his strength generated from downhill momentum to nudge them out of the way, just enough to create ample space for himself.

No matter what kind of defender the Mavs have put on Leonard, he just finds ways to plow through on his way to the rim with his usual terminator efficiency. 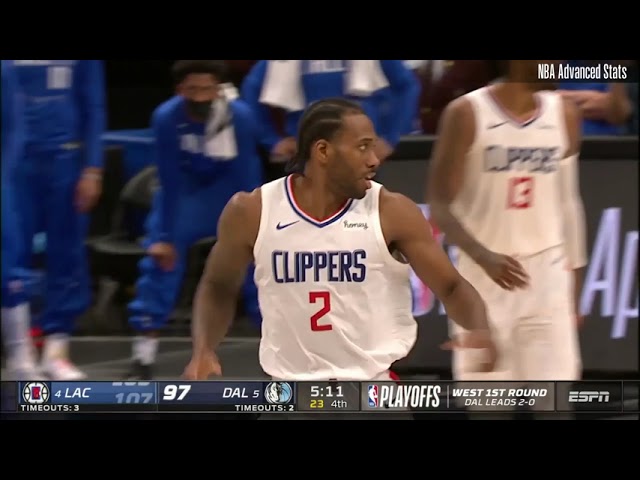 Just like George, Leonard has found ways to punish an overcommitting and overhelping Mavs defense that has become extremely wary of his shot-making. In particular, the Mavs have found it difficult to defend the Clippers’ swing-swing possessions generated from soft doubles or traps.

A perfect example is the possession below. Leonard gets the switch onto Jalen Brunson after Rajon Rondo sets the inverted screen. The blatant mismatch attracts help – Kleber comes over to double Leonard, which triggers the swing-swing sequence. An advantage is created on the weak side, with Porzingis having to close out on the wing toward Reggie Jackson.

A final swing to the corner and the fear of Leonard exploiting another mismatch bears fruit in the form of a Marcus Morris Sr corner three. 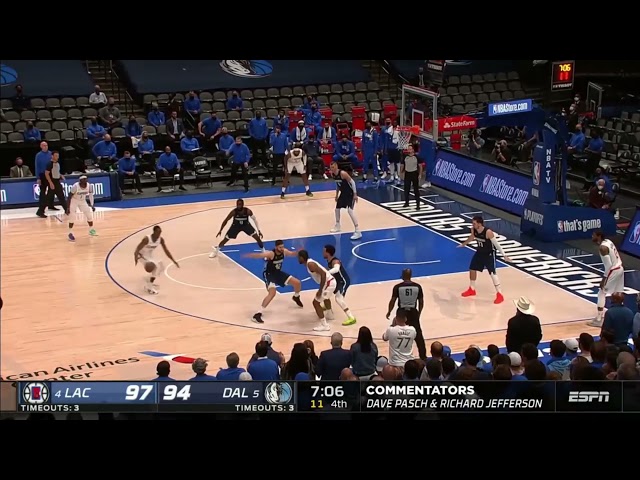 Leonard has taken complete control of the Mavs’ defensive string. He knows that his drives attract attention, that they collapse inward to the point of stretching the defense extremely thin. When the Mavs devote all of their attention toward stopping a Leonard rim attack, Leonard has the awareness and vision to dish out a world of hurt. 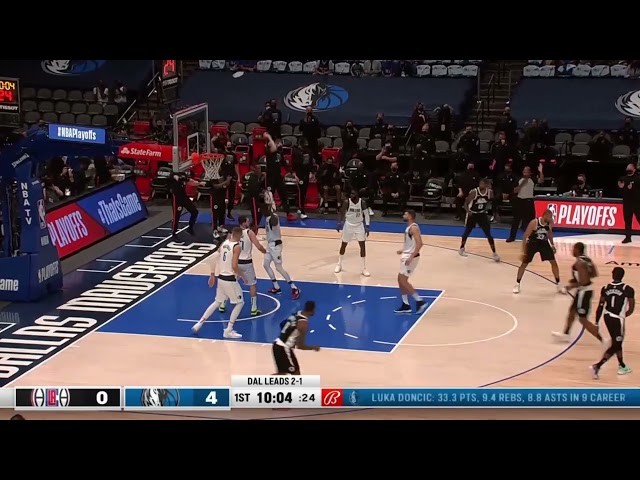 The difference between the first two games and the last two in terms of effective rim pressure has been stark. The Clippers’ rim frequency of 27% in Game 1 has seen a significant uptick: 35% in Games 2 and 4, with an overall clip of 64-of-88, good for a rim accuracy of 72.7%, 4th overall in the playoffs.

Coupled with improved three-point shooting – the Clippers shot 40.6% in Games 3 and 4 combined – and the Mavs’ hot shooting experiencing a drastic regression to the mean, the Mavs have suddenly found themselves with their backs against the wall and having to deal with relentless rim attacks from George and Leonard.

Credit to the Clippers, who made the proper adjustments and weathered the storm that is Doncic and the Mavs’ anomalous shooting. The ball is now in the Mavs’ court to see whether they can counter with adjustments of their own.

But at this rate, even if the Mavs may have the best player on the floor, the Clippers’ might just have the much better overall talent on their roster to exploit their counterpart’s weaknesses. – Rappler.com