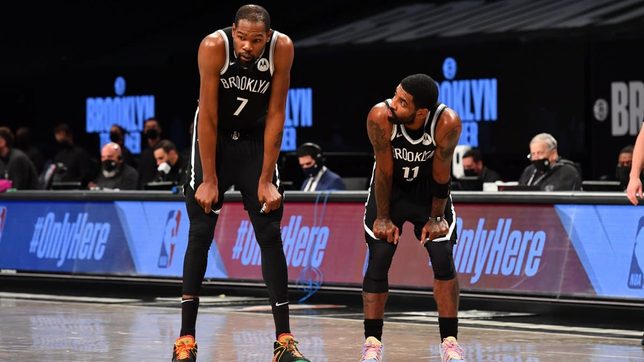 CHALLENGE. Kevin Durant (left) expects the Nets to step up if Kyrie Irving winds up absent in some games.

Facebook Twitter Copy URL
Copied
‘I’m envisioning Kyrie being a part of our team. Maybe I'm just naive, but that's just how I feel,’ says Kevin Durant as Kyrie Irving stands to miss games due to being unvaccinated

Brooklyn Nets forward Kevin Durant said he still envisions Kyrie Irving playing a role for the team this season despite uncertainty over the seven-time All Star’s COVID-19 vaccination status.

The season begins on October 19 and unvaccinated players must comply with a long list of restrictions to play in games and take part in team activities such as practice.

Irving has not said if he has been vaccinated and asked for privacy when asked about it late last month at a Nets media day, the NBA said.

The 29-year-old did not participate in practice on Tuesday and Wednesday.

“I’m envisioning Kyrie being a part of our team. Maybe I’m just naive, but that’s just how I feel,” Durant told reporters on Wednesday.

Durant said Irving needed time to deal with the matter but that the Nets had to adapt in his absence.

“He’s a special player so it’s going to be hard to duplicate what he brings,” he added. “But professional sports are about the next man up mentality, so we’re looking forward to guys stepping up and filling in that role as best as they can.”