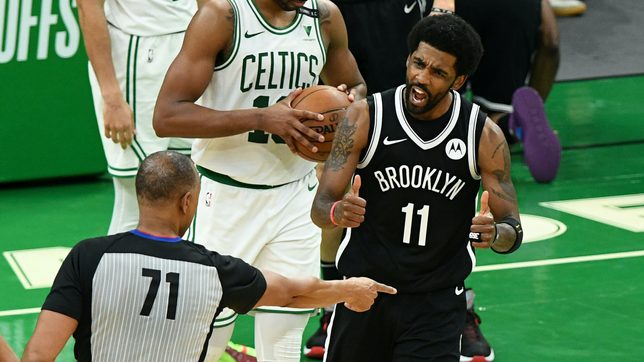 UNVACCINATED. Roughly 50 to 60 NBA players reportedly have yet to receive the first dose of a COVID-19 vaccine, including Kyrie Irving.

Facebook Twitter Copy URL
Copied
Although the NBA does not require its players to receive a vaccine, New York City – where Kyrie Irving and the Nets play their home games – has a mandate that disallows unvaccinated athletes from playing inside city limits

Brooklyn Nets star Kyrie Irving does not want to receive the COVID-19 vaccine, and his aunt suggested to Rolling Stone that the NBA should reach some sort of compromise with anti-vaccine players that would allow them to compete in a reduced number of games.

Rolling Stone’s report Saturday, September 25, on the anti-vax movement inside the NBA came on the heels of a different report from Fox Sports, saying Irving had yet to receive his first COVID jab.

The NBA is not mandating that players receive a vaccine, but New York City has a mandate in place that would disallow athletes from practicing or playing in games inside city limits.

“There are so many other players outside of him who are opting out, I would like to think they would make a way,” Kyrie’s aunt, Tyki Irving, told Rolling Stone. “It could be like every third game. So it still gives you a full season of being interactive and being on the court, but with the limitations that they’re, of course, oppressing upon you.”

Roughly 50 to 60 NBA players have yet to receive the first dose of a coronavirus vaccine, Rolling Stone reported.

The report also noted that Irving follows an Instagram account whose owner spreads baseless conspiracy theories that COVID vaccines are part of “Satan’s ultimate plan to enslave the human soul.” He has liked some of the account’s posts.

Irving also wields power in his role as a vice president on the executive committee of the players’ union.

The 2021-22 NBA regular season begins on October 19, when the Nets are scheduled to play the Milwaukee Bucks on the road. Their home opener is October 24 against Charlotte.

Irving is no stranger to missing games for personal reasons. He took an 11-day, seven-game leave of absence from the Nets early in the 2020-21 season for what he deemed “family and personal stuff.” – Rappler.com