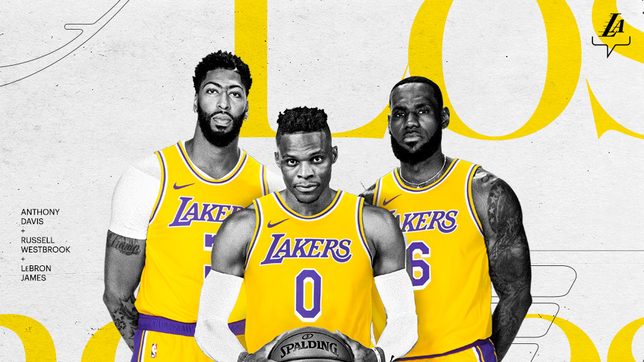 SUPER TEAM. The Lakers parade their own triple threat in (from left) Anthony Davis, Russell Westbrook, and LeBron James.

The Los Angeles Lakers on Friday, August 6, announced the acquisition of guard Russell Westbrook and three future second round picks from the Washington Wizards in exchange for Kentavious Caldwell-Pope, Montrezl Harrell, Kyle Kuzma, and the draft rights to Isaiah Jackson.

The Lakers also announced the signings of Carmelo Anthony and Kent Bazemore, but the big offseason move was bringing Westbrook aboard.

“It takes a special mentality of competitiveness to take on the role of point guard for the Los Angeles Lakers,” Lakers general manager Rob Pelinka said in a team statement.

“We have seen some of the all-time greats master that role here, and now Russell Westbrook gets to come home and do just that.”

Westbrook has the NBA’s most career triple-doubles (184), is a nine-time All-Star and has been named All-NBA nine times. He was the 2017 NBA MVP.

LeBron fires back at critics who say Lakers are too old “Russell was a tremendous leader for us and watching him make history while with the Wizards was a privilege for me, our players and our fans that none of us will ever forget,” Wizards general manager Tommy Sheppard said in a team news release.

“The impact he made on our franchise and our players in just one season is remarkable and we wish him the best as he continues his Hall of Fame career.”

The Wizards also acquired guard Spencer Dinwiddie from the Brooklyn Nets, guard Aaron Holiday, and the rights to Isaiah Todd and cash considerations from the Indiana Pacers in the five-team trade.

The Lakers also announced Friday that they have extended the contract of head coach Frank Vogel.

The length of the extension was not announced, but longtime NBA journalist Marc Stein reported earlier Friday that the extension would only be for one season.

In his two seasons leading the Lakers, Vogel has a 94-49 record, one division title, one Western Conference championship and one NBA championship in the 2019-20 season.