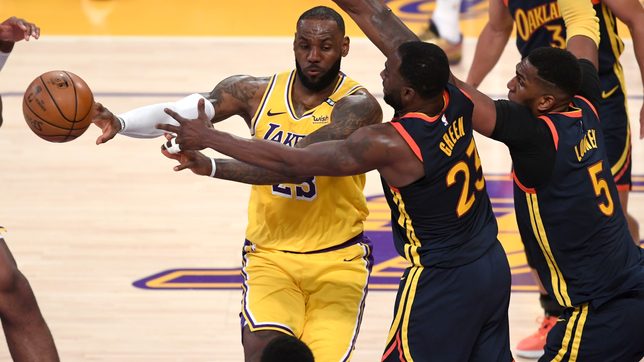 Facebook Twitter Copy URL
Copied
‘Mike Tyson always says everybody got a plan until you get to the ring and you get punched,’ says LeBron James

When the NBA envisioned how entertaining a play-in tournament would be, this is exactly what they had in mind.

In a hell of a basketball game that had the necessary drama to fuel its star power, LeBron James and his Los Angeles Lakers outlasted Steph Curry and his Golden State Warriors, 103-100, inside a nearly-packed Staples Center in the City of Angels.

Fittingly the most epic of four play-in games came down to two final shots between the league’s most epic global stars of the last decade.

“You never want to poke the bear,” Anthony Davis said after, in reference to his legendary teammate, who’s been presented with arguably his toughest road to a Finals in a career that many consider the greatest in hoops history.

LeBron, who got poked in the eye, saw three rings, and chose the middle, sank a deep three-pointer as the shot clock expired against the defense of, ironically, Curry.

It would be the final shot of a 48-minute bonanza because in an attempted counter to force overtime, the greatest shooter in NBA lore had no breathing space to receive the ball against Davis’ superb denial.

“He’s done it his whole career; he’s done it since I’ve known him,” Davis said of James’ clutch heroics.

“With a lot of practice, I was able to drain it.”

It’s a good thing he did, because had LeBron not saved the Lakers from what would have been a colossal defeat, their early effort, energy, and passion would be justifiably ridiculed on national airwaves.

“We had to bring the fight to the fight. They [were] ready to fight. We tried to ease into the game a little bit.”

To be fair the defending champions didn’t enter the contest an image of perfect health. Anyone who watches Davis and James know they aren’t operating at maximum efficiency, at least when compared to how athletically dominant they looked during LA’s bubble run.

Dennis Schroder, who ESPN references as part of this team’s Big Three, played like someone who needs better conditioning after dealing with COVID-19 for two weeks.

At halftime, he combined with LeBron and AD to shoot an abysmal 4-of-28 from the field. Montrezl Harrell, Talen Horton-Tucker, and Marc Gasol were non-factors. The only thing saving them was the superb play of Alex Caruso, who was impactful on both ends of the floor.

On the other side, Curry knocked down jumpers of insane difficulty and the Warriors danced and roared their way to the dugout. Why wouldn’t they? Golden State entered as a seven-point underdog and after 24 minutes of play, looked like the Dubs of their glorious heyday with a 55-42 lead.

The supporting cast of Juan Toscano-Anderson, Andrew Wiggins, and Jordan Poole were playing what looked like the game of their lives. And they were making sure the Lakers heard from them, too.

“You never want to poke the bear. I told Jordan Poole that, too,” Davis shared.

“We both got the double techs, I came down, hit the midrange, and said, ‘You done woke me up.’”

“Dudz and Smoove pretty much got on our ass at halftime,” LeBron said.

Duds is Jared Dudley and Smoove is Markeef Morris, two of LA’s veterans off the bench.

Neither played a single minute but their contributions were highlighted beyond the stat sheet.

“They got on us and showed us we gotta pick it up, pick this shit up; they brought the fight to our building and we gotta bring it right back,” LeBron said.

“When guys like that speak, you listen. We took it to heart, we didn’t take it personal, we just took it with us, and we improved our effort in the second half.”

There were three important factors that changed in the second half to flip momentum LA’s way.

First, the Warriors played like they were allergic to the basketball by coughing up turnovers on ridiculous plays; second, Lakers head coach Frank Vogel finally had enough of Andre Drummond’s disastrous pick-and-roll defense and played AD at the 5; and third, Davis finally realized the Warriors had no one to guard him and took his giant body to the rim.

Draymond Green, a former Defensive Player of the Year, played astonishingly good D to hinder AD in the first half. After the teams flipped courts, that was changed.

“The first half, we were playing hesitant, even myself,” Davis admitted.

“We had to remind ourselves at halftime, ‘Yo, we’ve been here before.’”

Is it a little bit concerning that LA has to remind itself of that at this point of the year?

“Mike Tyson always says everybody got a plan until you get to the ring and you get punched,” LeBron said.

“We did that and it felt good, it felt great, it settled us. It wasn’t comfortable, but it settled us, and we were able to bring the fight to them.”

Once the Lakers landed haymakers, the disparity in physicality – a hallmark of playoff success – between both sides took center stage.

Kyle Kuzma had some good moments, Kentavious Caldwell-Pope did his thing, and Wesley Matthews, after not playing in the first half, recorded a +17 in just 14 minutes of play. He had the best 1-of-4 shooting game of his career.

In addition to hitting timely threes, Caruso’s D forced Curry into making mistakes. The Dubs shot 15 three-pointers to the Lakers’ 10, but their 20 turnovers led to 29 points for the home squad.

Still, Curry was magnificent. Most players have one game in their careers where they look like the most special basketball player to ever exist. Steph’s had a season full of them. The biggest reason Golden State possessed an early lead and the only reason they didn’t crash later on was because No. 30 is on their roster, using next-level ball-handling skills and blink-and-you-miss-it shooting tricks to create those unforgettable “wow” moments that leave you asking for more.

Steph, the NBA scoring champ, finished with 37 points, 6 triples, and 7 rebounds. Given that LA double- and triple-teamed him every time he touched the ball, that he shot so well (12-of-23) is remarkable. As Vogel said afterwards, the Lakers threw the kitchen sink at Curry, yet it didn’t matter.

Oftentimes, it really does not.

Of course, it helped that Drummond’s early defense allowed Steph to get into a rhythm.

But ultimately, the Lakers got the one shot they needed from LeBron and the one stop they had to get on Steph.

Now they can turn their focus to the Phoenix Suns in the 2-7 matchup. As playoff discussions ramp up, there’s widespread belief LA will be too tough for Phoenix and advance to the semis. While the Lakers might be the superior team in size, it’s unwise to discount Chris Paul, Devin Booker, and the rest of the West’s new dynamic squad as an easy out.

Especially if the Lakers continue to come out flat.

Don’t forget: The Suns have an entire season worth of consistency with their lineups.

“It’s going to be pretty cool just to be on the same floor, competing, against one of the [fiercer] competitors this game has had over his career and I look forward to the matchup,” James said about Paul, one of his best friends.

In CP3, Phoenix has someone who can match James’ IQ and experience. In Booker, they have another scorer to challenge Los Angeles’ defense. Jae Crowder is no stranger to these Lakers, Mikal Bridges is the best player you’ve never heard of, and Monty Williams will have his young guns ready for action. It should be a spectacular series, one where if Game 7 takes place, it’ll be in the Valley of the Sun.

Davis has the easy matchup advantage up front, but will it require another Jordan Poole to get his juices flowing?

How many early punches can the Lakers take before their knees buckle prior to the final rounds?

Or will they finally go back to scoring the early knockouts?