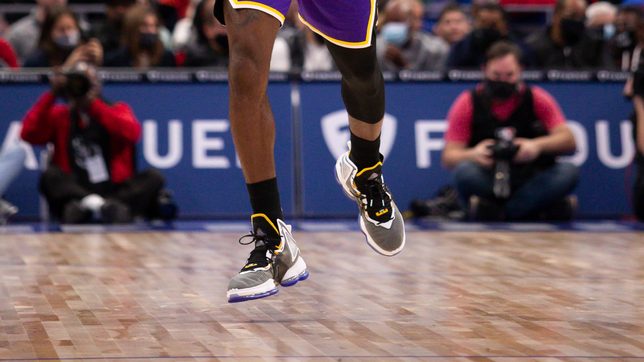 TOUGH WEEK. Lakers forward LeBron James calls out a play while dribbling the ball up the court.

LeBron James is in trouble with the NBA again.

The Los Angeles Lakers star received a $15,000 fine from the league on Friday, November 26, for using an obscene gesture late in a game against the Indiana Pacers on Wednesday.

Late in the fourth quarter of the Lakers’ overtime win against the Pacers, James made a deep three-point shot and then performed a celebration colloquially known in NBA circles as the “Big Balls Dance.”

As the four-times NBA Most Valuable Player, who was making his return from his first career suspension, made his way back down the court he gestured with a hand below his groin in a cupping motion while bouncing from foot to foot.

Earlier in the week, James was suspended for one game in response to his strike that bloodied the face of the Detroit Pistons’ Isaiah Stewart.

James reacted angrily to the one-game ban, calling the punishment “some bulls–,” which prompted the NBA to warn him publicly Friday against “using profane language during media availability.”

The suspension kept James out of the Lakers’ lone visit to face the New York Knicks this season, and Los Angeles dropped that game 106-100 without him on Tuesday.

James returned to action Wednesday at Indianapolis, and he scored 39 points as the Lakers beat the Pacers, 124-116, in overtime.

During the contest, James made an obscene gesture with 1:17 left in the fourth quarter after he sank a three-pointer that gave the Lakers a six-point lead.