No LeBron, Embiid in Lakers-Sixers duel 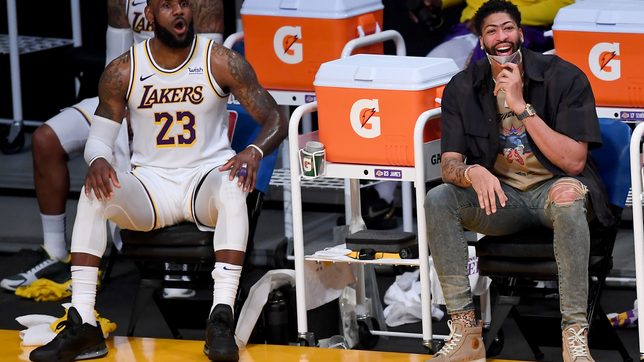 The once highly anticipated matchup between the Los Angeles Lakers and visiting Philadelphia 76ers on Thursday night, March 25 (Friday, March 26, Manila time) has lost much of its magnetism in the past two weeks.

Lakers star LeBron James went down with a high ankle sprain on Saturday in a 99-94 loss to the visiting Atlanta Hawks, and the four-time league MVP remains sidelined indefinitely.

Philadelphia leading scorer and rebounder Joel Embiid sustained a left knee injury on March 12 against the Washington Wizards and the four-time All Star isn’t expected to play against the Lakers.

Los Angeles was already without Anthony Davis, the eight-time All Star who has been sidelined since mid-February with a calf strain. He’s expected to be reevaluated this weekend but won’t be available against the 76ers.

“We’re staying positive,” Lakers coach Frank Vogel said. “We’ve got great belief in this group that, even with AD and LeBron out, we can win games during this stretch, and there’s going to be a silver lining at the end of it.”

There hasn’t been so far.

In the past two games without James and Davis, the Lakers have lost by double digits, the first time that’s happened to the Lakers in back-to-back games this season.

Los Angeles went down 111-94 at the Phoenix Suns on Saturday night, and couldn’t match the New Orleans Pelicans in a 128-111 road loss on Tuesday.

Vogel said Davis and James are missed on both ends of the court, but particularly on offense.

“Getting us organized offensively is really probably my top priority right now,” Vogel said. “I know we can tighten the screws defensively, but we’ve got to be better on [the offensive] end.”

The 76ers have forged on without Embiid and remain atop the Eastern Conference standings.

Philadelphia improved to 2-0 on its current six-game road trip with a 108-98 win against the Golden State Warriors on Tuesday, the third straight win for the 76ers and ninth in the past 10 games.

Among the players who’ve helped fill Embiid’s void is Tobias Harris, who had 25 points and 13 rebounds against the Warriors and is averaging 24.3 points and 8.7 rebounds in the 6 games Embiid has been out of the lineup.

“He is clearly one of our leaders if not the leader,” 76ers coach Doc Rivers said of Harris.

Even though the 76ers won’t have Embiid against Los Angeles, they could get shooting guard Seth Curry back.

Curry has missed the past 3 games with a sprained left ankle but took part in shooting drills before the Golden State game and did not have any setbacks.

Curry is fifth on the Sixers in scoring at 12.9 points a game.

The Lakers have also been without starting center Marc Gasol, who has missed the entire month of March due to the NBA’s health and safety protocols. Vogel said Gasol is still working himself back into shape.

“Until they tell me he’s cleared, this is the group that we got,” Vogel said. “We’ve got to go win a game Thursday night.”

Vogel has tried different methods to bring length to his starting lineup, most recently giving Devontae Cacok his first NBA start in the loss on Tuesday. Cacok finished with 4 points and 2 rebounds in 13 minutes. – Rappler.com